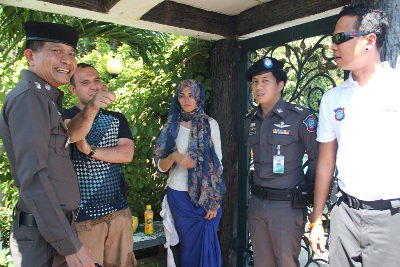 PHUKET: The two tourists who disappeared yesterday while trekking through the Khao Phra Taew Wildlife & Forest Reserve in central Phuket were found alive and well today.

British tourists Mohammed Samir El Shimi, 28, and Hanna Zareen 26, were discovered early this afternoon by a local villager named only as “Ms Suphatra” who was walking through the park.

“The search resumed this morning and continued until about 1:15pm today, when we received a call from the taxi driver who dropped them off at the park. The driver said he had been told that the couple had been found alive and well,” Col Peerayuth said.

The taxi driver had received a call from Ms Suphatra after she bumped into the two tourists by chance while walking through the park.

“They are both okay and have not suffered any injuries. They are a little tired and have scratches from walking through the jungle,” Col Peerayuth told the Phuket Gazette.