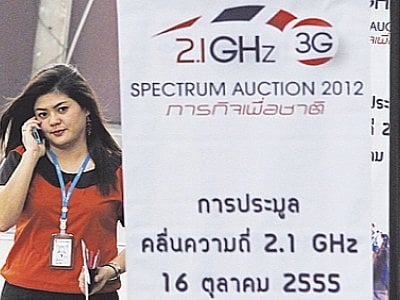 As I’ve remarked before, Thailand appears to be the last country in the world to officially allocate channels for HSPA (“3G”) signals. North Korea and Zimbabwe, the other two global holdouts, have offered 3G for more than a year.

To explain what’s happening, let me draw an extended, if inaccurate, analogy.

The government uses its bandwidth licensing capabilities for many purposes. Notoriously, in the US, the Federal Communications Commission (FCC) has wielded its frequency-allocation power to censor what can be broadcast over TV and radio. If you’ve never heard George Carlin’s monologue Seven Words You Can Never Say on Television, it’s worth a trip to Google to find it.

Governments also use their frequency powers to generate revenue. Lots and lots of revenue.

Long ago, the government of Thailand assigned channel 900 (actually, the 900 MHz frequency) to the then state-owned TOT phone company. Later it assigned channel 850 to the state-created company known as CAT. The frequency “concessions” were given to TOT and CAT long before HSPA, LTE, 3G and 4G were a gleam in any bureaucrat’s eye.

AIS teamed up with TOT and launched its mobile phone service in October, 1990. AIS, once the crown jewel of the Shinawatra fortune, is currently owned by the Singapore government, both through its Temasek Holdings agency (which controls 40%) and Singapore Telecommunications, which, with Thai Trust Fund and OCBC nominees, holds another 23%.

As the technology evolved, AIS (and TOT) added HSPA (so-called “3G”) technology, and launched the first, fledgling 3G network in May, 2008, under a “Build-Transfer-Operate” or BTO agreement, which allowed AIS to build and pay for new network equipment, but then required AIS to transfer the network to TOT.

It wasn’t clear then – and isn’t clear now – if the original TOT concession allowed TOT to sub-lease its channel to AIS for use in delivering 3G services. Lawsuits and political wrangling ensued, not only with the regulatory agencies, but with the Thai parliament and the parade of governments that followed Thaksin’s departure in 2006.

Not to be outdone at reaping the billions-of-baht 3G rewards, CAT forged alliances with True’s wholly-owned subsidiary True Move, which started 3G service in January 2009 and DTAC, which started in September 2009.

True’s parent company, Charoen Pokphand Group, has its roots in the chicken and egg businesses.

It’s one of Thailand’s largest companies (revenue in excess of US$30 billion annually), with businesses including CP Foods and the 7-11 franchise of Thailand. It’s a, uh, true Thai company. On the other hand, the Telenor Group of Norway owns 43% of DTAC directly, and much of the balance of the company is owned by Telenor-related Thai companies. The government of Norway owns 54% of Telenor.

Although individual contracts vary, as a general rule of thumb, AIS, True Move and DTAC all give about 25% of their gross 3G revenue to TOT and CAT, respectively. They’re also held to BTO agreements that mean capital investments by the three accrue, in fact, to TOT and CAT. Are you starting to get the picture?

The current web of corporate structures, alliances, agreements and (of course) payments in the 3G industry gives new dimensions to the term “Byzantine.”

For the past four years, the people of Thailand have been promised a clean slate – a restructuring of the status quo, driven by something called the “3G Auction”. As mentioned in the Phuket Gazette recently, the government held the auction on October 16.

The auction sold off development and marketing rights for 3G technology on nine different channels, all close to channel 2100 (or 2.1 GHz). In an arrangement found to be, uh, cozy to many, each bidder was allowed to bid on a maximum of three channels. Only three bidders appeared: AIS, True Move and DTAC. Each ended up with three channels. (Note that TOT and CAT didn’t have much reason to bid: they already have channels allotted, and those channels are perfectly capable of using 3G technology).

The government set the rules and qualifications for the bidders. Some feel that the qualifications were slanted very much in favor of AIS, True Move and DTAC, to the exclusion of foreign-owned carriers and possible competitors.

Jasmine (parent of 3BB, and the only other major internet service provider in Thailand) didn’t bid. Minimum bid for each channel was set at 4.5 bn baht. Six of the channels sold for the minimum, but AIS paid a premium of 8% over the minimum bid for its three channels.

Next week I’ll explain why AIS wanted specific channels, while True Move and DTAC are content with any available.

The auction raised a total of 41.6 bn baht, about US$1.4 bn, in startup fees. Besides the startup fees, each of the companies will be required to pay the government an additional amount – believed to be in the neighborhood of 5% of gross revenue.

That’s a huge cut from the 25% royalty now in effect.

It isn’t clear how much of that money (if any) will go into TOT or CAT’s coffers, to mitigate the sudden loss of billions of baht in revenue.

Legal challenges to the auction are sure to ensue, but it seems unlikely at this point that the results will be declared invalid.

This Thai drama is unfolding against a worldwide shift from 3G to 4G now at fever pitch – more accurately, HSPA and HSPA+ “3G” technology, which has been commercially available in many parts of the world for more than a decade, is on its way out.

Worldwide, service providers are rolling out LTE “4G” networks at an unprecedented rate.

As I explained in my Live Wire article last month, 4G is not only significantly faster than 3G, it’s able to accommodate much more data traffic over a given channel. There are drawbacks to 4G (it doesn’t handle voice calls as readily as 3G, for example), the world is rapidly moving to 4G, and for good reason.

With 3G on the wane, and 4G rapidly becoming the standard for the future, you have to wonder how AIS, True Move and DTAC plan on selling enough 3G bandwidth to recoup their investments. The winning bidders have won the right to install technology that’s a full generation behind what’s currently widely available.

Next week, I’ll talk about the implications of this short-sighted approach.