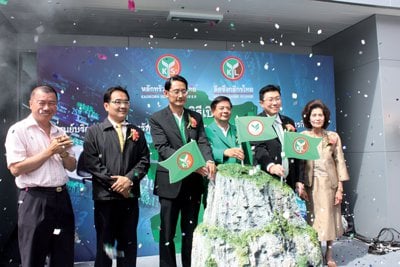 The center will specialize in investment and lending services for Kasikorn clients in Phuket and the entire southern region.

Padermpob Songkroh, Managing Director of Private Fund Management, Kasikorn Securities said, “The center is one of only 12 nationwide and the third such center to be opened outside of the Bangkok metropolitan area. The first one opened in 2010 in Chiang Mai and the second in Pattaya last year. A fourth one is planned for the Isarn region in the near future.”

“Kasikorn gives importance to the expansion of investment channels via Kasikorn Bank branches that have market opportunity and potential,” he continued.

“These centers increase access to services for investing in integrated capital markets and serve bank client groups which number more than 9 million subscribers. Access to investment opportunities is made possible by opening of ‘Full Branches’ or Business Centers in major cities, in addition to ‘Mini Branches’ also known as K Investment Corners,” he explained.

He continued, “Phuket has great economic potential and is preparing for the ASEAN Economic Community, which will take affect in the coming three to four years. The new center will improve the strength of our services and increase access in the Southern region to investment opportunities, which are expanding.”

As for the new Phuket center’s target in the first three months, Mr Padermpob said the branch has set a goal to open 100 new accounts.

Also attending the opening ceremony was Akaranan Titsiriwit, Managing Director of Kasikorn Leasing Co Ltd, who went on to reveal the following figures.

“We now have about 3,000 to 4,000 clients in Phuket and our growth target this year is set at about 38%. We will support loans for both Japanese and European cars. In all, Kasikorn has as much as 400,000 loan portfolios and outstanding loans are valued at about 70 billion baht,” he said.

“In the first nine months of last year we were able to issue loans for 800,000 cars. However, we didn’t reach our target due to the flooding, which had affected [business] in the last three months. As long as nothing major happens this year, we expect to see growth and reach our goals,” he added.