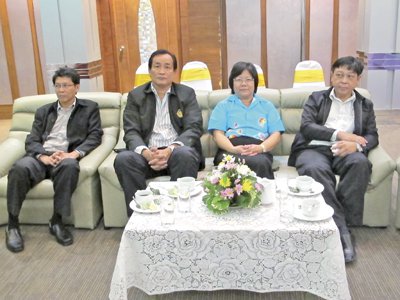 PHUKET: Employers in Phuket have been allotted additional time, until December 14, to have their Burmese, Laotian and Cambodian migrant workers complete the nationality verification process so they can be legally registered to work in Thailand.

V/Gov Sommai explained that the Thai Cabinet granted the extension, which succeeded the previous deadline of June 14, so that migrant workers would have three more months to complete the nationality verification process and employers would have three months after that to apply for the appropriate work permits.

“There are 7,867 business owners in Phuket who employ 69,978 legally registered migrant workers, which is considerably high when compared with the rest of Thailand,” V/Gov Sommai said.

At the meeting, employment officials stressed that employers wanting to hire Lao or Cambodian workers must first obtain from the PPEO a permit for their employee to leave Thailand. The employer must then contact the Laos or Cambodian Embassy in Thailand to obtain the correct nationality-verification application form.

After the documents have been secured, the employee must go to the employment office in his or her home country to complete the process.

For Burmese workers, the employer can obtain the correct nationality-verification application form from the PPEO or download it from the Department of Employment website.

Officials reiterated that only after an employee has successfully completed the nationality-verification process can an employer apply for the appropriate work permit.

AirAsia ready for shift to Don Mueang
Thai AirAsia affirms its readiness to transfer all of its operations to Don Mueang International Airport (DMK), executives have announced.

The airline has scheduled October 1, three months from now, as the date when all of its services will be based at DMK.

The decision to shift its Thailand hub to DMK, from Suvarnabhumi International Airport, was made on the consideration that the older airport, located on Paholyothin Road in the north part of the Thai capital, will be able to better accommodate the airline’s growing fleet, and thus provide its customers with the utmost satisfaction.

Tassapon Bijleveld, CEO of Thai AirAsia, said that AirAsia’s decision to return to Don Mueang Airport was carefully assessed as he noted that the capabilities of DMK are in line with AirAsia’s own growth plan.

Thorough consideration into transferring to DMK found that the airport’s capabilities, coupled with assistance measures by the Airports of Thailand Company, meant AirAsia could manage its costs more effectively and provide passengers with improved service.

“The un-congested Don Mueang Airport is sure to prove a benefit to us when we boost our fleet of Airbus A320s to a total of 48 and welcome more customers.The airport’s location also makes it conducive to further travel. Prospective travelers should have confidence in what Don Mueang has to offer,” said Mr. Tassapon.

After the shift takes place, the airline’s flights will retain their ‘FD’ code and original schedules.

Passengers who are affected by the switch can alter their plans by choosing another travel date on the same route, either 7 days before or after their original travel date – at no additional cost.

Passengers also have an option to convert the paid flight into credit towards another flight, which must be redeemed within 90 days. This option will only be available to affected passengers who purchased their tickets before June 26, 2012, whose travel dates are from October 1, 2012 and onwards.

Prefab technology cuts labor, time
Prefabrication construction technology being implemented in Phuket by at least one major developer is slated to speed up product delivery windows while reducing dependency on labor – both by as much as 75%.

Suriya Wannabuit, Executive Vice President of the Project Management and Marketing Department of Sansiri Pcl, spoke with the Phuket Gazette about his firm’s benchmarks with prefab.

“With the fixed-mold, pre-cast method we are using with our Habitia and Habitown developments in Phuket, we can complete a house in two and a half to four months,” he said.

Mr Suriya went on to add that the crew required to build a house using such methods is reduced to only 10 to 15 laborers per house, compared to conventional crews that need up to 40 workers.

Another disadvantage of conventional construction methods is the instability of construction crews fluctuating throughout the prolonged process.

For example, lots of labor is required during the early structure and framing stages, but less so in the finishing stages, Suriya notes.

“With prefab, the same crew remains constant throughout the building cycle, and are mostly needed in the finishing stages.

Erected from an initial investment of about 25 million baht, Suriya estimated that the yard incurs monthly overheads of about 300,000 baht.