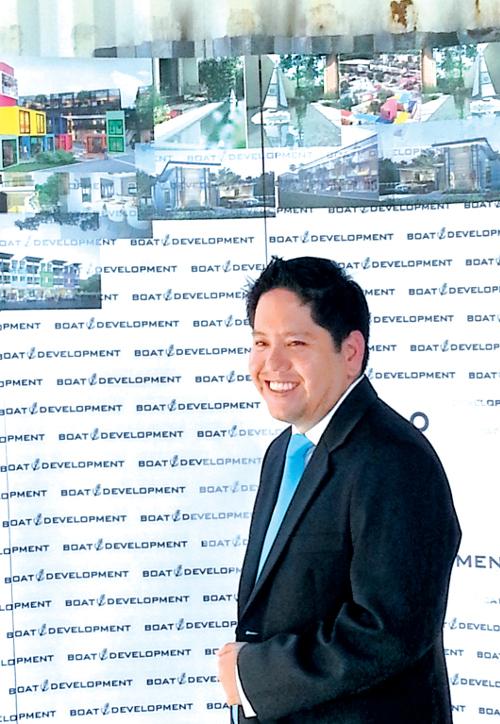 Boon is the latest of the Yongsakul generation to make his contribution to the changing face of the island. “My great-grandfather came to Phuket as a worker in the local tin mines. My grandfather, Kong Yongsakul, was very clever at acquiring many tracts of land in Phuket and around Southern Thailand. He was also an ‘angel’ investor helping many people start projects. My father, Kanit, built Boat Lagoon and worked for many years to get proper land titles for all our land so that we can proceed to develop,” he says.

Perhaps the most famous of the Yongsakul developments, Boat Lagoon is one of the region’s premier boating and lifestyle destinations. Opening over 20 years ago, Boat Lagoon helped create Phuket as a destination for yachts and those associated with the marine industry.”We also built the Phuket Shopping Center on Ratsada Road 30 years ago. It received national architectural awards for its creative interpretation of the island’s Sino-Portuguese heritage. Since then, we have looked for designers who create buildings and spaces that are beautiful but also highly functional.”

Boon received much of his education in New Zealand. He graduated from the University of Canterbury at Christchurch with a degree in civil engineering and then returned to Bangkok where he enrolled at the prestigious Sasin Graduate Institute of Business Administration and obtained an MBA in Finance and Marketing.”My father had developed the Boat Lagoon so after graduation, I joined the Royal Thai Navy as I wanted to learn about the marine industry. The military taught me about discipline and commitment.”

Boon plans to create many developments in Phuket.”We have an extensive land bank of which only a small percentage is being used. For example, we have a partnership with Laguna Phuket to build 2,000 homes in Cherng Thalay as Laguna Park on 400 rai of our land. This week we are proudly opening Boat Avenue Shopping Street at what was the T-junction at the turnoff to Laguna Phuket.” This valuable property sat empty and undeveloped for many years until Boon saw its potential.”The problem was the feng shui of that corner which was considered back luck. I could see if I built a road through the project to connect with the upscale Sai Taan development behind, that I could turn a T-junction into a four way stop. And with putting shrines to both Buddhist and Muslim deities around the property, I believe success is assured.”

Phuket’s second and largest Villa Market has opened in Boat Avenue so already his plans seem to be working.”When looking at a potential project, I have certain criteria it must meet. First, I need to be convinced that it can sell. Then I need to see the demand for the project and finally, I always look to the future that the land and area will appreciate in value.”

He is particularly encouraged by the growth of the overseas Chinese and Russian markets. His plans for commercial development include how to attract and sustain these two nationalities. He has invited Hong Kong Seafood restaurant to open a franchise in one of his projects and wants to make business

One more challenge for McCormack