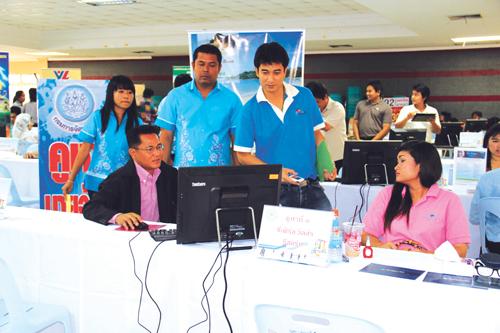 PHUKET: Of the 6,000 job vacancies offered through the “e-jobs@Phuket 2013” job fair held recently at Phuket Rajbhat University, only 118 positions were immediately filled, the Phuket Gazette has learned.

The available positions – in Phuket, as well as in neighboring provinces such as Krabi and Phang Nga – were at more than 100 companies, including hotels, shopping malls, medical clinics and real estate businesses.

“The positions that were filled immediately were [examples of] perfect matches between employers and employees,” Yawapa said.

“Before the fair launched, job-seekers could post their credentials online through our website and employers could post details of their vacant positions. It saved time for both parties in finding their ‘match’ for the job,” she added.

As for the remaining vacancies, she explained that employers still need to screen applicants through the interview process.

“We expect that by the end of this month, no less than 30% of the vacancies will be filled as a result of the job fair, as well as the continued processing of new applications through our website.”

Asked to speculate on such a ‘low match’ ratio, Ms Yawapa said that a lot of the applicants were either over qualified for the available positions, or that benefits and salary did not meet the applicants’ expectations.

She noted that many of the applicants were not necessarily unemployed, but may have already been employed and were considering making a career change.

Ms Yawapa went on to give a break-down of the applicants’ levels of education: More than half, 834 or 52.8%, had a bachelors degree while only 12 (0.76%) had a masters degree. Meanwhile, 240 or 15% of the applicants had an advanced vocational diploma (in Thai, commonly denoted as PorWorSor).

Another 173 applicants, or 10.9% of the total, had either a general vocational diploma (Por-WorChor) or technical diploma (PorWorTor); while 154 or 9.7% of those applying had obtained a high school diploma as their highest education. Another 94, or 5.9%, had a 9th grade (Mattayom 3) diploma.

Phuket Business: B28bn worth of 20-baht notes to get exchanged