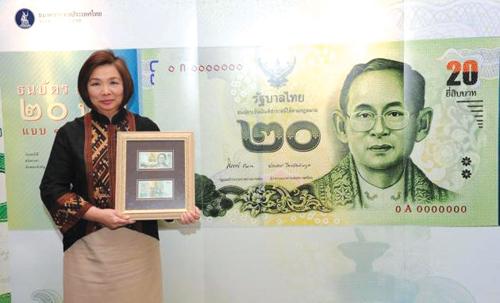 PHUKET: As part of the Bank of Thailand’s (BoT) policy to make its banknotes more modern and user friendly, 4 billion baht worth of new series-16 20-baht banknotes are being put into circulation.

Until now, the Kingdom’s lowest-value, yet most widely used banknotes have not been fraud-proof in synchronizing with electronic finance machines.

Like the new 50-baht bank notes issued last year, the new 20 baht banknotes are marked with braille indicating the value of the note (the braille symbol 2 for 20-baht and 5 for 50-baht).

The new banknotes should now be available for exchange at commercial banks in Phuket and nationwide.

Ms Tongurai said that within one year, the BoT will look to replace all series 15 notes, which have been in circulation for as much as 10 years.

She insisted that their would not be a shortage in 20-baht banknotes, adding that the base cost for each new banknote was only 80 satang, about 33% less than the series 15
average cost of 1.2 baht per banknote.

The series 16 banknote is still green, and will be the same size as its predecessor. Among the key security features are a watermark depicting the portrait of HM King Bhumibol Adulyadej alongside the number 20 clearly visible when viewed against the light.

“The portrait of King Rama IX in the Royal House of Chakri gown will be displayed on the front of the banknote. On the back will be the images of the royal statue of King Ramkhamhaeng.

“Another security feature is color-shift along the thread located on the back of the note. It is embedded inside the paper and partially emerges to the surface at regular intervals. Its color changes from green to magenta when viewed from different angles, Ms Tongurai explained.

Also, irregular shapes printed on both sides combine to form the numeral 20 when the note is held up to the light.

To help visually impaired people identify the new note, it features raised letters and numerals and two tactile marks in the shape of flowers, which represent the number 2 in braille.

The announcement of the new 20 baht banknote follows the issuing of a new 16 series 50-baht banknote last year.

She explained the reason for starting with 20 and 50 baht notes: “Since ATM machines don’t use these banknotes, there has been negative impacts for the financial system as well as [economic and disabled] minorities.