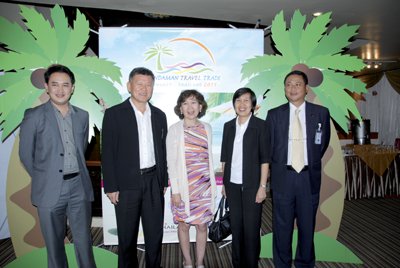 PHUKET: Local officials and tourism industry representatives are optimistic about the revival of the European tourist market in the near future, following the recent success of a Phuket tourism promotion roadshow in Germany.

The Internationale Tourismus – Borse 2012 (ITB 2012), one of the largest tourism trade shows in the world, was held in Berlin, Germany.

PTA President Somboon Jirayus said: “Europe has always been a key tourist market for Phuket. Even though its economy still has problems, we believe that the region will continue to be an important tourist source market for us in the long run.

“We expect the EU economy to improve within two years, and at the same time Phuket Airport should be able to accommodate more direct flights from Europe. . . we are hoping that the Eastern European tourist market will expand.”

“We leased out a 180 square meter area to facilitate the 28 operators and promote tourism to the European market.”

“From ITB 2012, we’ve gotten confirmation from Thai Airways that there will be at least two more direct flights to Phuket by April,” he said.

Following their recent takeover of Air Berlin, Etihad Airways, the national carrier of the United Arab Emirates, will be offering direct flight service to Phuket from Abu Dhabi after March 25, he noted.

Mr Phurit pointed out that direct flights between Copenhagen and Phuket, initially launched as a seasonal service, will now become a regular service available year round.

These developments are a testament to the effectiveness of our roadshow campaigns, he added.

Vice Governor Chamroen went on to point out that this was the sixth time Phuket has joined the ITB tourism trade fair.

“Each year the number of participating operators, including both hotels and spas, increases.

“In future events, we expect more marina and golf operators to join to add more diversity to our offerings,” he said.

He added that officials are also thinking about setting up booths to promote all the Andaman seaboard provinces (Ranong, Phang Nga, Krabi, Trang, Satun).

“Each of these provinces has unique offerings and promoting them will increase selling potential and overall interest,” he said.

“A lot of tour agents and tourists showed interest in Phuket’s booth at ITB this year, which marks increased tourist confidence in traveling to Phuket,” he said.

Planned upcoming Phuket roadshows will shift the focus back to Asian markets with a campaign planned in Malaysia and Singapore in May, and one in Japan in July.

The roadshows are supported by the Phuket Provincial Administration Organization.