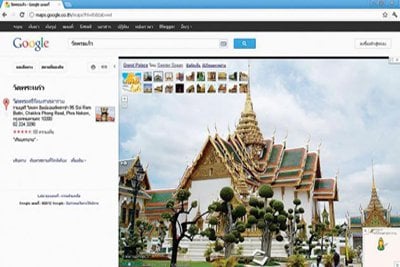 PHUKET (The Nation): Six months after starting work on the project, Google Thailand yesterday officially launched the ‘Google Street View’ service in the Kingdom – the second country in Southeast Asia in which it is available, following Singapore.

Street view is an online technology that provides panoramic views of city streets and some other areas. Thailand is the 35th country in the world in which Google Street View has been made available. It was first launched in the United States in 2007.

Pornthip Kongchun, head of marketing for Google Thailand, said that six months after the company embarked on the project, Thai people can now experience Google Street View for themselves. The service currently covers Bangkok and its surrounding urban areas, Chiang Mai and Phuket. Coverage of these provinces is about 95 per cent.

She added that Google Street View is designed in part as a tool to leverage Thailand’s tourism industry. The Google Street View project in Italy’s ancient city of Pompeii resulted in an immediate 25-per-cent increase in tourists.

Tourism Authority of Thailand (TAT) governor Suraphon Svetasreni said the TAT is collaborating with Google Thailand to use Street View imagery to promote Thailand’s tourist attractions throughout the country by showing the world what they look like, where they are and how to get there.

The TAT has invited people to nominate interesting places or national treasures to be featured in Google Street View for the world to explore at www.tourismthailand.org/mymiracle.

“We expect it should help to boost tourism by even more than the 25 per cent it achieved in Italy’s Pompeii. The TAT earlier targeted attracting around 19.5 million people to visit Thailand this year. With Google Street View, we hope it will be higher than that, but we have not yet finalised the numbers,” Thapanee said.

Pornthip emphasised that Google has gone to great lengths to safeguard privacy while allowing all Thai users to benefit from the Google Street View feature.

To use Google Street View in Thailand click here.