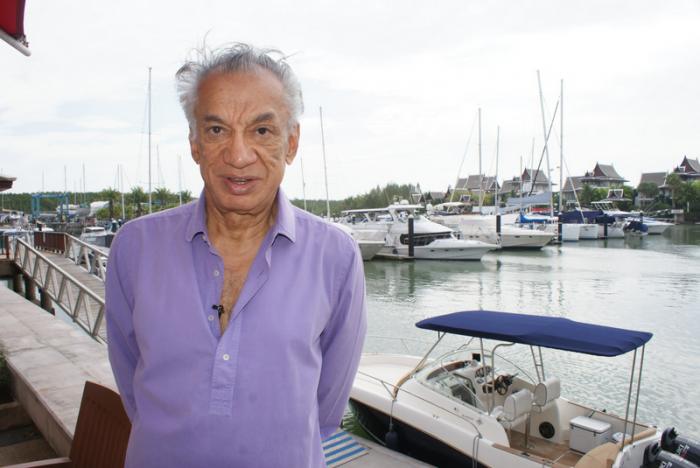 PHUKET: The 12-million-baht project to dredge the Koh Kaew Canal and deepen the existing approach channel from Phang Nga Bay has commenced and is scheduled to be completed by October.

The project, which was approved in January by Phuket Governor Maitri Inthusut, will increase access to the Phuket Boat Lagoon, the Royal Phuket Marina (RPM) and the nearby village fishing pier, allowing larger boats to enter regardless of tidal levels.

Upon approving the project, Governor Maitri explained that the government was willing to spend the money on dredging the canal serving the two private marinas in order to improve Phuket’s marine infrastructure.

“Doing so will make Phuket more attractive for people organizing MICE [Meeting, Incentive, Convention and Exhibition] events and also for yacht owners who contribute to marine tourism,” he said.

The Chairman of the Royal Phuket Marina, Gulu Lalvani, welcomed the launch of the project and said it would enable him to market his marina to larger boat operators, as access would no longer be restricted by tidal levels.

“It’s a major breakthrough, we have been waiting for it for ten years, [and it] finally started yesterday,” he told the Phuket Gazette.

“We haven’t been marketing to bigger boats, because we have had this problem that they are only able to go in and out on the high tide. It’s inconvenient for large boat tour operators, because they want to have people leaving at 9am or 10am, and at that time the tides are not always suitable,” he added.

The dredging, which began on March 16, will increase the depth of the 1.6 kilometer canal and the 3.6km approach channel to two meters at low tide, allowing boats up to approximately 35 meters to enter and leave at will.

“We are very pleased that it has commenced, because it will enhance the marina’s activity, more boats can come in, and it will be much more convenient,” he said.

“After the [increased number of] boats come in there will be more people, more restaurants, more shops and it will enhance the value of the whole of Boat Lagoon.”

“It will change the traffic, and it will be much more busy when the channel is dredged, and the big boats can come in to Boat Lagoon instead of going to Singapore or Malaysia,” he added.

Mr Lalvani praised Gov Maitri for approving the project and said he hoped that once completed, the number of high spending tourists who arrive in Phuket on luxury yachts would increase, bringing benefits to the economy of the whole island.

“Every year I’ve been requesting them to dredge the channel, because the channel belongs to the government, like the roads. And the government finally realized that marine tourists, the ones who come here on boats, spend, on average, a lot more than the normal tourists.

“So, finally, the current governor, Maitri, who I have to say is really an action man, told me last year that ‘I’ll make sure there is money in this year’s budget to dredge the channel, because I realize the importance of marine tourism to Phuket’.”