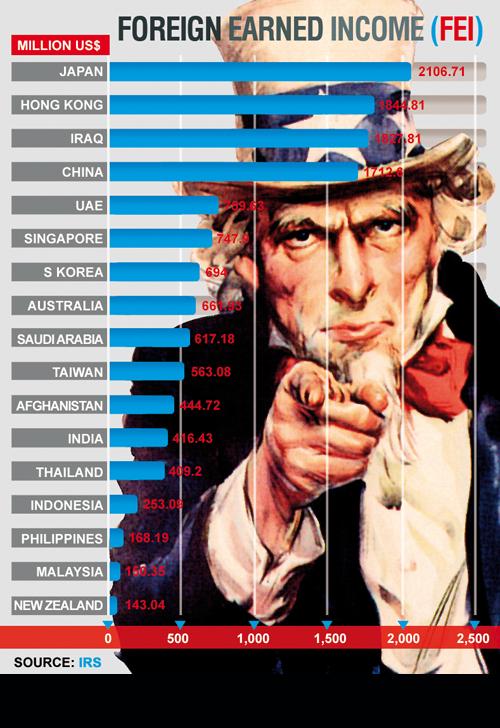 PHUKET: In light of the ongoing ‘federal fiscal fiasco’ in Washington DC, the US tax regime is looking to grow its global revenue pool, with American expats residing in places like Phuket high on the list to be scrutinized.

Recently a group of American taxpayers gathered in Phuket for an informative yet dreaded update seminar about the latest income reporting and tax filing requirements for US citizens earning income abroad.

Sponsored by the Phuket chapter of the American Chamber of Commerce (AMCHAM) at the Holiday Inn, Patong, the seminar was presented by international tax specialist John Andes, a US CPA and Thai-American partner with the Bangkok-based accounting firm KPMG Phoomchai Tax Ltd.

Mr Andes reiterated that all American citizens, regardless of their domicile or residency status, are required to file US income tax returns annually, report worldwide income and disclose certain information about foreign investments.

Americans residing overseas who have earned income – no matter how or where they were paid – have two primary options to consider when trying to reduce their US tax obligations.

Qualified individuals can claim the foreign earned income (FEI) exclusion by filing form 2555, which is filed with Form 1040. Almost all US taxpayers residing outside the US will need to file paper returns.

The IRS center in which to send the forms will differ depending on whether there is a payment due or not.

This information is explained in the form 1040 instructions, or through the tax software or tax preparer.

In order to elect the FEI exclusion, US citizens or permanent residents (green card holders) must qualify by meeting three criteria.

The first is to pass either the bona fide residence test, or alternatively, the physical presence test.

To pass the bona fide residence test, a US taxpayer must have lived in a foreign country for an uninterrupted period that includes an entire tax year (January 1 – December 31).

This test also requires that the taxpayer did not claim to be a non-resident of the foreign country of residence for its tax purposes.

Slightly more flexible, the physical presence test requires the taxpayer to be physically present in a foreign country (or countries) for 330 full days during any consecutive 12-month period – though not necessarily in the same calendar year.

He went on to address the so-called statute of limitations on how far back the IRS is authorized to conduct a tax audit.

“The important thing to remember is that in order to evoke the statute of limitations, you need to file the required tax return and information returns.”

“If you fail to comply [by not filing] and they [the IRS] decide to investigate you, then there is no statute of limitations to be evoked. This means that the IRS can audit you as far back as it wants.”

Another option for American taxpayers to consider when looking to reduce their US tax obligation is to claim a foreign tax credit for foreign income taxes paid or accrued on income taxable in the foreign country and the US.

This credit, designed to avoid double taxation, cannot be claimed against income that was excluded from US taxation through the FEI exclusion.

“The foreign tax credit reduces actual US tax on a dollar-to-dollar basis; a deduction for foreign taxes only reduces income subject to tax,” he said.

Whether to elect an FEI exclusion or claim a tax credit depends on if the taxpayer’s non-US tax home is in a high tax jurisdiction (which varies depending on income bracket) such as Thailand or countries in the European Union.

“If you are in a high tax rate jurisdiction, meaning you are paying taxes at a higher rate in the foreign jurisdiction than you would in the US, then it makes more sense to forgo the FEI exclusion election,” he said.

John added that once an FEI exclusion is elected, it remains in effect for all subsequent years unless revoked. However, once revoked, it cannot be re-elected before the sixth year following the year the revocation was effective, unless the taxpayer obtains the IRS Commissioner’s consent, he warned.

US taxpayers who are living abroad on the general tax filing deadline of April 15 get an automatic extension of two months to file. The taxpayer can file for an additional four month extension (total six months, or by October), using form 4868.

If, however, the taxpayer has an amount owing to the IRS, he must pay that amount by April 15. The extension is only an extension to file, not to pay.

In a future issue, we’ll go over the reporting requirements for foreign assets and investments, as well as other tax developments.

Phuket Business: Why Google is still the best