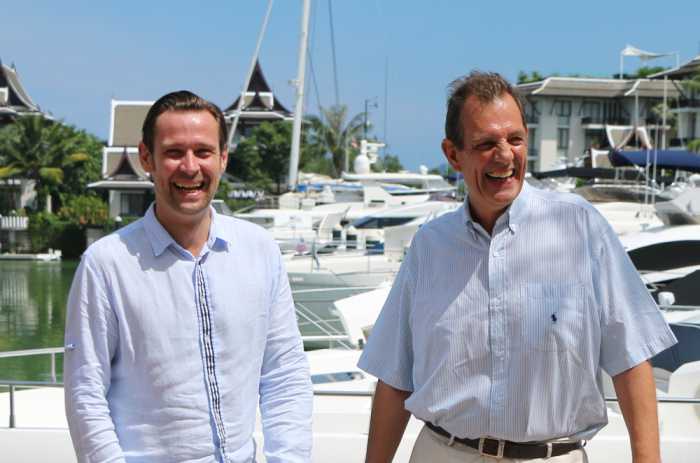 PHUKET: A duo of marketing experts have joined the ranks of Royal Phuket Marina to put it back on the Phuket map and in the minds of the island’s residents.

“I had forgotten about RPM,” says Ian Spurdle, the marina’s new Director of Sales and Marketing for Luxury Property. “I’ve been in Phuket for 12 years, and have known RPM since its initial days, since the launch. Most of the developments that I’ve been involved with in Phuket have been on the west coast, and frankly, I had forgotten about RPM. And many other people have as well. But RPM is a hidden gem.”

“The initial stage is to promote the Marina back to locals of Phuket, both Thais and foreigners, and we’ll move on from there.”

“We want people to come here and enjoy themselves. I’m not talking about the mass tourism market, but locals who can enjoy a place like this. Take a look at Clarke Quay in Singapore, a place that has got a great atmosphere, where people can go and hang out. That’s what I’m trying to create here,” explains Jay.

And even though he only joined the RPM ranks in August, he has already conjured up some ideas of how to make it happen.

“I think we were pitching ourselves a bit too high and what I want to do is bring it down a step or two. Instead of having brands like Gucci or Prada, we will have something a bit more accessible. Phuket has both the mega-rich people and the not-so-rich people; we need to find a middle ground.”

Ian, who came to RPM to head up the property side of the marina and all of its aspects, believes his work will greatly benefit from Jay’s efforts.

“We will bring more people here, more families, and will remind people what a wonderful place RPM is. Currently, there aren’t many people who are full-time residents here. We have a lot of space for restaurants, but the restaurants are never really fully occupied. So Jay and I are here to get RPM back on the map.”

Both managers have great faith in their product, prizing its beauty, convenience and location.

“It’s beautiful; we’ve got an underground car park, the impressive driveway, the great boardwalk. It’s a stunning place to have as your address,” says Jay.

Ian adds, “Here at RPM we are in a very controlled environment – once you cross the gate and go down our long, sweeping drive, it feels like a little bit of Europe in Phuket. And for people who are past being holiday makers, it’s very attractive,” he adds.

And there is still 150 rai of land, which makes for 75 per cent of the project, waiting to be built up. So Jay regards his task at RPM in the context of the recent changes on Phuket’s west coast and perceives them as a chance not only for RPM, but for the whole of the east coast.

“There are great places to spend time on the east coast. I want to get this place into gear and work to drive business here. I want to promote the east coast as a destination and I’m open to working with other establishments to make it happen,” explains Jay.

“The east coast is a sleeping giant.”