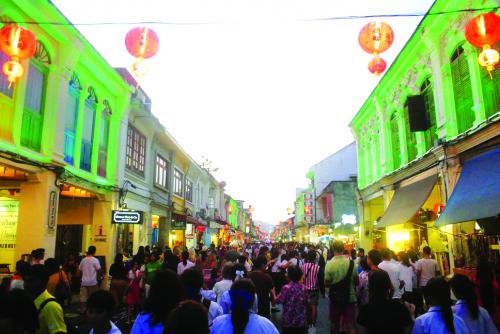 PHUKET: Wanprapha Suksomboon, acting director of the Tourism Authority of Thailand’s Phuket office, recently said that the political turmoil in Bangkok has had minimal negative effects on local tourism.

There have been only “a few” booking cancellations, she said, citing the fact that Phuket can be accessed by direct international flights that don’t need to connect in the Thai capital.

Since most of Phuket’s tourists now are coming from China and Russia, she said
the province would have a better opportunity when the Chinese New Year festive period was past to really see how the tourism industry has been affected, if at all.

She noted that Phuket’s tourist arrivals increase every year and that this is expected to be the case this year considering the recent expansion progress of the airport.

Deputy Mayor of Patong Municipality Chairat Sukban echoed the sentiments of Ms Wanprapha, saying that there have not been significant cancellations for tourists coming to Patong as a result of the political turmoil.

Many of the tourists had made reservations well in advance, he said, adding that if the problems in Bangkok persist for a long time, there would definitely be a negative impact felt locally.

If anything, he pointed out that since many governments had issued warnings to their citizens not to travel to close to the protest areas, that many tourists had opted to come Phuket instead.

He went on to stress that Patong Municipality is prepared to look after the safety and welfare of tourists, citing the UN’s awarding it a “role-model city” for disaster management planning (in 2010).

Anticipating the 2015 Asean Economic Community, the new campaign is being dubbed “Sanam Lung Baan” – literally the “garden in the backyard”.

With a target of bringing the number of arrivals to the island up to 15 million annually, the campaign will seek out and emphasize land, sea and air routes that avoid Bangkok.
He pointed out that the prime Asean markets of Indonesia, Malaysia and Singapore already had direct flights to and from Phuket, and that tourists in Laos and Vietnam could easily access Phuket via AirAsia flights via Ubon Ratchathani.

He said key Asean markets with weaker links to Phuket such as the Philippines and Brunei would be addressed in the campaign, with an aim of increasing convenience for tourists there.

Mr Phurit explained that the new campaign will promote niche markets such as spa, health and golf, with an emphasis on the 3-5 star hospitality sector.

On the topic of niche markets, Mr Phurit revealed that the TAT is also looking to increase the number of tourists coming from the Mediterranean region – namely Morocco, Algeria, Greece, Spain, Turkey, Georgia and Albania.