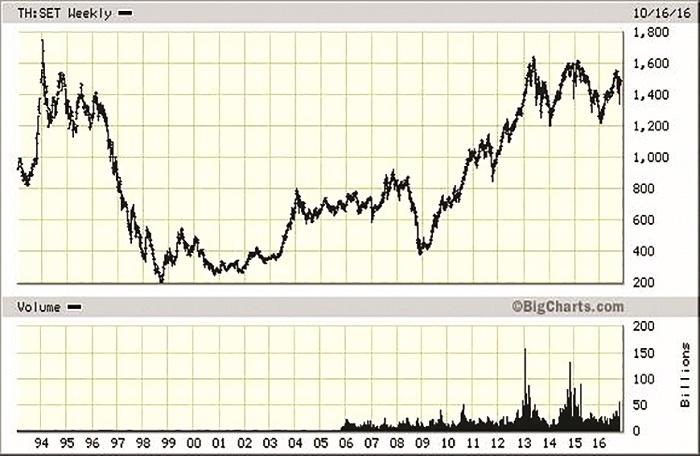 THERE is a good lesson in handling panic that can be learned from recent events in Thailand.

The SET index, which is a broad measure of the Thai stock market, went on a pretty wild ride in response to the news regarding the monarchy. If you are not aware of what happened, the chart (right) shows the massive sell-off, only to have the market rebound back to pre-panic levels over the following week.

Now, the market had already made a pretty sharp correction in the beginning of September, and then did the standard 50 per cent retracement before consolidating around the 1,500 level.

When a breakout to the upside failed, the Thai market was primed for a move to the downside already. Thus this panic was not solely related to the news, but technically, we were already lined up for a big move one way or the other.

With the news, of course, the direction became very clear.

What is interesting is that the market has already recovered back to the 1,500 level, at least temporarily. I am not making any predictions here, but in the short term panic is almost never the correct thing to do regardless of whether you are a speculator or an investor.

If you did hold a view that the recent events in Thailand had a negative implication for the future direction of the stock market, you would be able to exit at a much better price than you would have mid-panic.

Now I am not advocating sitting through an entire down market if you think one is coming. My opinion is that if there is one coming, it has nothing to do with events inside Thailand, but rather the entire region of Asia.

Even more specifically, global consumption dropping off could hit China very hard and be a catalyst for a long overdue drop in stock prices throughout Asia.

If you look at the last major crisis in the region, it had quite a long recovery period.

You can see that in the few years before 1997, the Thai stock market traded from 1,200 to 1,400 mostly. If you zoomed in to view the break down, you could have easily gotten out on a rebound somewhere in the 1,000 to 1,200 region without selling mid-panic.

Normally bear markets come hard and fast and then retrace 50 per cent before settling into a new range, as I mentioned above.

Usually leaving any money you don’t intend to spend in the next decade to ride through a cycle is not considered too risky. In this instance it took more than 15 years to get back to levels seen before the crisis.

I am not really trying to make any predictions in this other than to show the long term picture and remind you that when markets move fast, panic is usually the worst thing to do.

Of course looking back over the past 20 years on the above chart, you can see that we are still near the top of the range of where this market has traded.

The SET has not been able to make new highs above where it topped out back in 1994. Imagine buying during the hysteria and 20 years later still being underwater on the position.

Panic can be on the upside as well as when things are crashing. You should never chase a market up either. There will always be another opportunity to buy at reasonable levels.

David Mayes, MBA, resides in Phuket and provides wealth management services to expatriates around the globe, focusing on UK pension transfers. He can be reached at lifeisamazingthailand@gmail.com or 085-335 8573. Faramond UK is regulated by the FCA and provides advice on pensions and taxation.