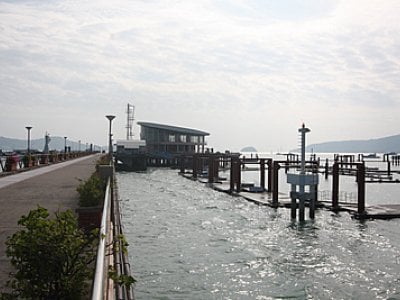 PHUKET: Work on the 70-million-baht Chalong Bay Marina project is now about 90% complete and should be finished early in the new year, officials say.

Phuriphat Teerakulpisut, Chief of the Marine Department Region 5 office in Phuket Town, said opening of the 44-slip facility will improve the island’s ability to accommodate the growing number of yachts that port in Phuket or visit the island.

Once completed, the project will be turned over to the Treasury Department and then the Phuket Provincial Administration Organization (OrBorJor), which already oversees operation of the existing Chalong Pier and related facilities, he said.

“The one-stop service center will offer a variety of services including an Immigration arrivals and departure checkpoint, Customs and Immigration offices, a Marine Department Office and improved facilities for tourists, many of whom already use Chalong Pier to travel to other islands in and around Phuket,” he added.

However, Mr Phuriphat expressed disappointment that plans to build a much larger, 200-slip facility in Chalong Bay failed due to lack of funding and “other problems” [including strong local resistance and a public hearing process – Ed].

The number of yachts visiting Phuket is now at a record high, but the five existing marinas on the island can only accommodate a maximum of about 1,000 boats at a time. Some 2,000 vessels currently clear customs and immigration at Chalong Pier [a year], he said.

Lack of facilities or a clear policy to further develop Phuket as a marine tourism destination could result in a loss of “quality tourists” to rival destinations in Singapore, Malaysia and especially Vietnam, he added.

To help solve the problem, his office has requested a 6 million baht budget in fiscal 2012 to sink 300 more moorings: 200 in Chalong Bay and 100 at Ao Por. If approved, the project will reduce coral reef destruction caused by anchors, better organize movement of vessels and increase government control, safety and security in these areas, he said.