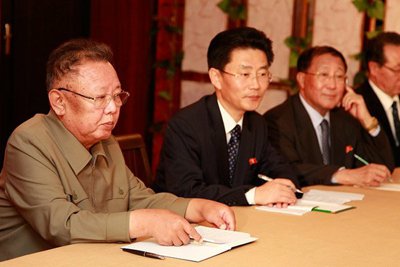 Kim Jong-il, the mysterious Communist leader who ruled North Korea for more than seventeen years, died of a massive heart attack on early Saturday morning, the government announced today. He was 69 or 70 years old.

The state-run Korean Central News Agency (KCNA) said Kim suffered an ‘advanced, acute myocardial infarction, complicated with a heart shock,’ while on a train for a ‘field guidance tour’ on Saturday morning. He was pronounced dead at 8:30am local time.

“Every possible first-aid measure was taken immediately,” KCNA said, without disclosing the exact place of his death. It added that the heart attack was the result of “great mental and physical strain caused by his uninterrupted field guidance tour for the building of a thriving nation.”

Kim’s body will be taken to the Kumsusan Memorial Palace in Pyongyang, the capital of North Korea, where mourners will be received from tomorrow until December 27. A funeral ceremony is scheduled to be held in Pyongyang on December 28.

Following the funeral ceremony, on December 29, memorial services will be held across the country. Guns will be fired in Pyongyang and in the capital cities of each province while North Koreans observe three minutes of silence. All trains and North Korean ships will also blow their sirens.

KCNA said all forms of entertainment will be banned during the mourning period, which will end on December 29 following the nationwide memorial. It said institutions and business will hoist flags at half-mast in honor of Kim.

Kim Jong-un, the third and youngest son of Kim, will lead the memorial service in Pyongyang. KCNA described Kim Jong-un as the “Great Successor” following Kim’s death, but gave no specific details although he is widely expected to take over from his father as the Supreme Leader.

Kim’s health had been deteriorating in recent years, and state-run media acknowledged for the first time on Monday that he had been receiving medical treatment for ‘cardiac and cerebrovascular diseases’ for a ‘long period’. Kim is believed to have suffered a stroke in 2008.

As his health deteriorated, Kim probably knew he didn’t have much time left to choose and prepare a successor. In September 2010, Kim Jong-un was appointed as Vice Chairman of the Central Military Commission and named a member of the ruling Workers’ Party Central Committee.

The appointments were the first publicly announced posts given to Kim Jong-un, who is believed to be in his late 20s and who was educated in Switzerland. He reportedly resembles his father the most and has always been the favorite among his three sons, although little is known about him.

Kim ruled the Communist nation since the death of his father, Kim Il-sung, in 1994. The mystery about Kim’s life extended right back to his birth. North Korea claimed he was born on February 16, 1942, at a secret military camp on the Baekdu Mountain in Japanese Korea, ‘under a double rainbow as a new star appeared in the heavens.’ But Soviet records indicate he was likely born a year earlier, in the village of Vyatskoye.