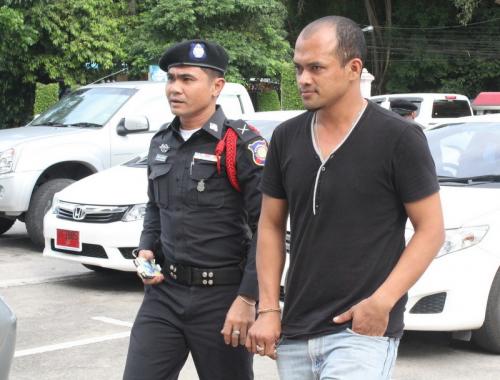 PHUKET: The Phuket taxi driver accused of holding a 19-year-old Chinese tourist captive for hours and threatening her with sexually intimidating gestures on Friday will face deprivation of liberty and drug charges.

Mr Paitoon was interrogated by Phuket City Police for six hours on Saturday after the Chinese tourist filed her complaint. She accused the driver of holding her captive in his car for nearly five hours and repeatedly touching her while he drove around (story here).

“He will be called in for more questioning today,” Phuket City Police Inspector Watcharapong Plaiphan said.

“We are preparing to charge him with deprivation of liberty and with taking drugs,” Lt Col Watcharapong added.

During the marathon interrogation of Mr Paitoon at Phuket City Police Station on Saturday, the Chinese tourist gave her statement to police through a translator in front of the Thai press.

“I got in a taxi at the airport and asked the driver to take me to a hotel in Patong. The driver convinced me to sit in the front seat. He said the back seat had a problem, so I sat in the front,” she said.

The tourist identified the taxi as a bronze Honda Civic with Phuket license plates KorPor 5602.

“We left the airport at around 4:30pm. The driver kept touching my legs. I tried to stop him, but he kept doing it. So I took off my shoe and told him to stop or I would hit him,” she said.

“He didn’t stop. He kept touching me and asking if he could kiss me while he drove around. I had no idea where we were. The doors were locked. All the time he kept asking to kiss me and sometimes he hugged me.

Mr Paitoon drove around until his car ran out of gas at about 9pm. When he unlocked the doors to get out of the car, the 19-year-old got out and yelled for help. Passers-by heard her pleas and took her to a police station, she said*.

Mr Paitoon, who independently operated an illegal taxi at the airport, has denied the accusations, Col Watcharapong confirmed.

“He said she was the one who tried to assault him by hitting him with her shoe.

“We did not believe his statement, so we tested him for drugs. He tested positive. He confessed that he took one and a half pills of ya bah [methamphetamine] on the day,” he added.

“We are now preparing to charge him with deprivation of liberty and with being under the influence of drugs,” Col Watcharapong said.

Ekkachai Siri of the Phuket Tourist Police, who first received the complaint from the tourist, confirmed the Chinese embassy has been notified of the incident.

Correction: The original report stated that the tourist told police, “He asked to kiss me again. So I let him do it then he got out of the car.” The error is regretted.