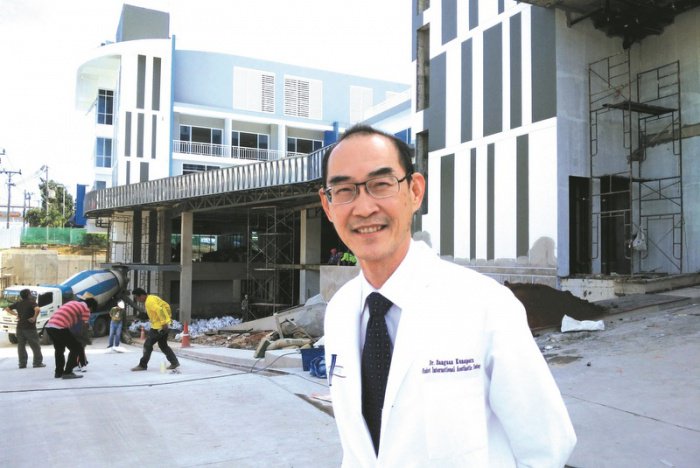 This month, the group will stage the soft opening of a new 900 million baht medical tourism facility at Phuket International Hospital.

“When Bangkok Hospital took over, they wanted Phuket International Hospital to focus on cosmetic surgery, so they re-assigned the building for medical tourism,” Dr Sanguan said. “It will not be just for plastic surgery, but will house an anti-aging department and a skin care department as well.”

Teams of surgeons from the two hospitals will be joining forces at the new facility, which has 10 operation auditoria and almost 70 patient rooms.

The number of in-patient rooms gives the facility plenty of room for growth, as the two hospitals combined served 3,500 patients last year, and the teams produced more than 500 million baht in revenue, explains Dr Sanguan.

“We arranged for this building to be a one-stop service for our clients. Our clients can come from the airport or their hotel to this single building to get their consultation, pre-operation investigation and the operation itself, and even enjoy the comfortable lobby and in-patient rooms,” he says.

Though 2014 was a strong year, there have been struggles for the hospital this year, with nearly a 25 per cent decline in patient numbers, forcing the group to look for new markets.

Phuket International Hospital’s original medical tourism market was Americans seeking sex changes. Because of the brilliant work of Dr Preecha Tiewtranon from the Preecha Aesthetic Institute in Bangkok; Dr Sanguan from Phuket International Hospital; and Dr Suporn Watanyusakul from the Suporn Clinic in Cholburi, Phuket is often referred to as the ‘World Capital of Sex Changes’.

With access to the internet in Thailand by the late 90s, the doctors were able to effectively market their high-quality work globally. However, the American market was eventually replaced by Australians and New Zealanders, who now comprise 70 per cent of the patients in the hospitals.

“Phuket is one of the key players in medical tourism in Thailand, or I would even say the Asia Pacific region. After the AEC opens up, we hope that we can tap into new markets,” Dr Sanguan says.

He has already met with medical travel agents in Myanmar to start gauging the potential of the market.

“There is a lot of opportunity there, because there are not many good hospitals or clinics that can provide good services to the Myanmar people or expats,” he says.

“Most Myanmar patients go to Bangkok, but they are interested in what we have down here in the way of aesthetic plastic surgery.”

Though the Chinese market is also part of the strategy, as it is Phuket’s largest in-bound market, most of them who come to Thailand for medical tourism are here for wellness, anti-aging and skin treatment packages. Few are arriving for plastic surgery.

The new facility at Phuket International Hospital is now fully operational with a large surgeon team, and Dr Sanguan expects to see prices at the facility unchanged despite the merger and is hopeful that the group will be able to regain lost ground and bring profits back to the level of 2014.

“During this downward trend of the global economy, we don’t think we can increase our prices because we might lose patients to centers in Bangkok and in other countries,” Dr Sanguan says.

However, a number of mega-shopping complexes being developed on the island are expected to increase Phuket’s attractiveness. It will become a destination where new techniques and cutting-edge equipment allow women to undergo breast augmentation – the most popular type of aesthetic surgery – and be on one of Phuket’s famous beaches the following day, and there will also be world-class shopping too, Dr Sanguan says.