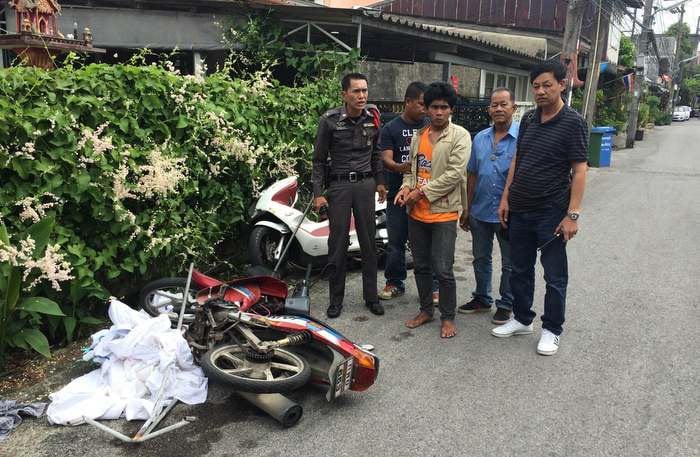 PHUKET: A Phuket local pursued a snatch thief attempting to flee the scene of the crime for three kilometers before the thief crashed his motorbike today.

Supachai Mattanang, 20, witnessed the the man rip a gold necklace, worth about 20,000 baht, off the neck of a Myanmar national near the Down Town Market before fleeing the scene on his motorbike.

“The man lost control on a curve, hit a parked motorcycle and fell off of his bike,” Mr Sapuchai told police. “I jumped off my bike and tried to grab him, but he ran away into the trees. I called the police and they were able to arrest him.”

Phuket City Police were able to quickly apprehend Sarawut Nitapai, 20, who was found in possession of the gold necklace.

“Mr Sarawut confessed to the theft, claiming that he needed money for his son’s hospital bills. We checked his criminal record and found that he had just been released from prison in April for the same thing,” said Capt Wetchasak Juladung of the Phuket City Police.

“We would like to thank Mr Supachai for the great job he did. We are grateful that he wasn’t harmed while pursuing the criminal.”

Mr Supachai admitted that his personal safety wasn’t something he had been thinking about.

“I just saw someone doing something that was wrong and knew that I didn’t want them to get away,” Mr Supachai said.

The gold necklace was returned to the victim, Mu Eng.