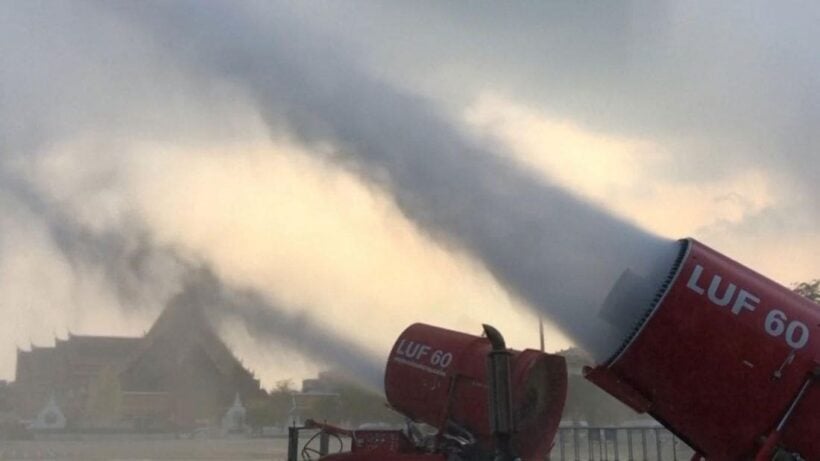 Authorities have been including cleaning roads more often, spraying water into the sky, trying to produce artificial rain and enforcing strict laws against vehicles emitting dirty exhaust fumes. Their attempts have provided good photo opportunities for the media but done little to relieve the smog problem.

Amid worries that prolonged exposure to a cloud of PM2.5 (airborne dust particles 2.5 microns in diameter or less) will lead to a spike in health conditions and diseases in the long run, Rungsrit Kanjanavanit, a medical lecturer at Chiang Mai University, urged relevant agencies to tackle air pollution at its root.

“The authorities must ensure clean air for everyone, or at least they should improve their strategies to protect people from air pollution and raise public awareness on this dangerous threat to their health.”

Nearly a week since the PM2.5 level in Bangkok rose significantly, forming a thick layer of smog over the city, the air in Bangkok yesterday remained severely polluted.

“The authorities still do not realise the real dangers of air pollution, as they are very unlike imminent threats to people such as disasters and diseases, which can kill people instantly,” Rungsrit said.

“The impacts to our health from PM2.5 are more subtle and it takes a long time before people get sick from air pollution, so many people and authorities underestimate the deadly threat from PM2.5 to our health,” he said.

The PM2.5 dust particles are extremely small and they are fine enough to be absorbed in the human bloodstream through the lungs. This will cause chronic diseases such as asthma, cancer, heart disease and stroke in the long term if there is exposure to air pollution, Rungsrit said.

According to the WHO, each year there are more deaths from air pollution than from Aids and malaria combined; the average deaths every year from these two diseases are around 2.36 million people, while deaths from all kinds of air pollution were as high as 6.3 million.

The Pollution Control Department (PCD) should warn people on an hourly basis about air pollution, especially to protect vulnerable groups such as elderly people, children and sick people, and also adjust the country’s PM2.5 safety standards to align with that of the WHO, Rungsrit said.

“People should not just wear facemasks when they go outside during periods of bad air quality, but they should also create their own safe zones at their home and their workplace by installing air purifiers to clean the air indoor,” he noted. 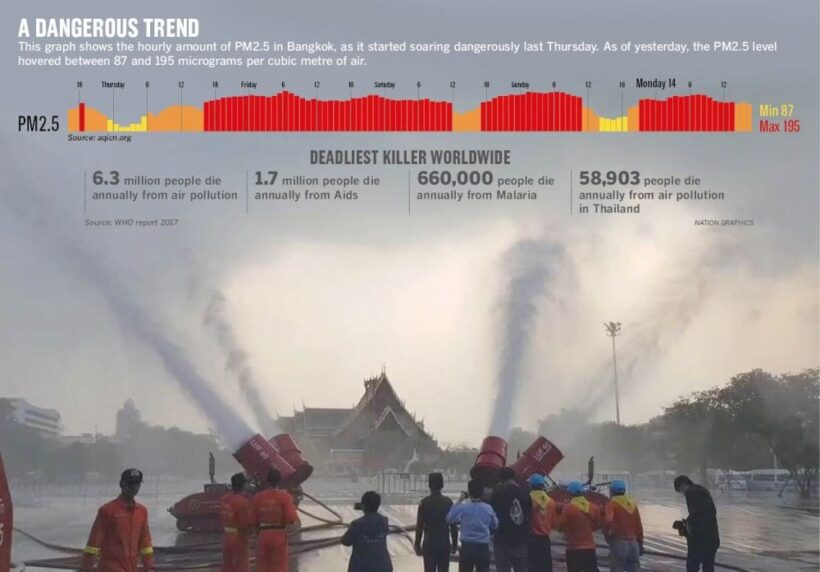