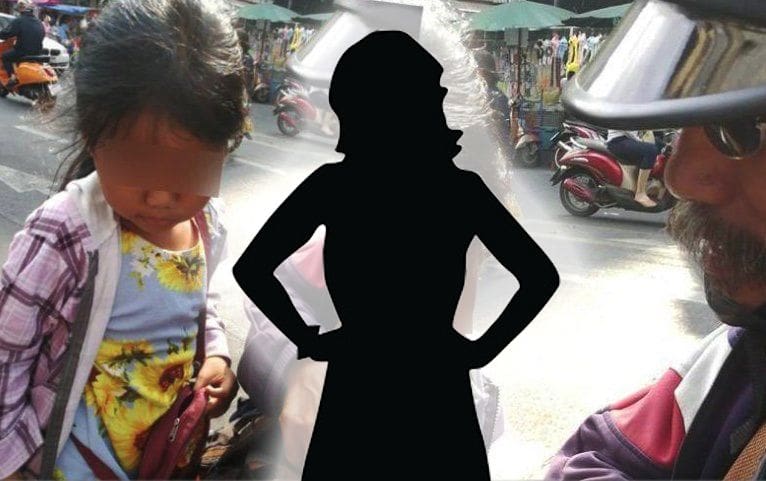 There’s always two sides of a story. This time the wife of the ‘lovely’ motorcycle taxi driver who had his ‘heart-breaking’ story posted all over social media on Tuesday, is having her say.

The man, at the time, claimed that he had paid the mortgage for eight years but the house was in her name and she now had another man. So he left with his eight year old daughter, who he loves dearly. to start a new life.

But the wife has now fought back with claims on Daily News that he is a “cheat and a sex maniac” who is using his daughter as a pawn in their fight.

On Tuesday the motorcycle taxi rider was being heaped with praise for being such a lovely guy taking his young daughter everywhere with him, sometimes as much as 200 kilometres around Bangkok’s streets every day.

Netizens called him a “model father” and a fine man doing everything for his daughter.

Now his 43 year old wife “Saen” tells Daily News Online a very different story. She said they were together for 12 years until his sexual demands on her became far too much.

When she refused his sexual advances he would beat her up and the matter ended up at the Thung Khru police station. They remained living at the same address so they could both take care of their daughter who was three at the time.

The husband had claimed that he was the one who was paying the mortgage on the house. Saen said this was wrong and that SHE paid everything and was also paying for their child’s school fees.

She says she works six days a week while her lazy husband did a few hours a day on the taxi rank “when it suited him”.

She describes him as a liar and a fraud but it was his unreasonable sexual appetite that caused the break-up.

She says she now provides 600 baht a day to take care of their daughter and claims that he was using the child as a pawn.

The man had not sought any publicity about his situation. Instead the original publicity came from one of his passengers who enquired why he was taking his daughter everywhere with him.