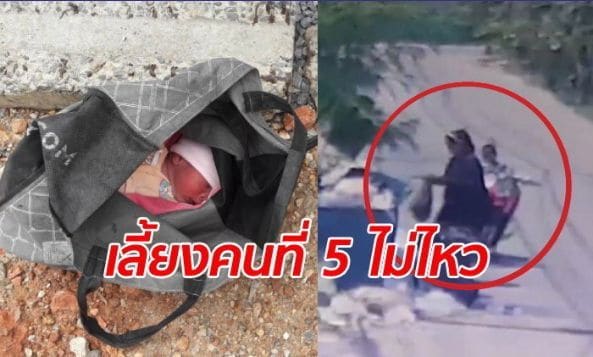 A 29 year old Thai woman has been arrested after she drove with another son on a motorcycle and dumped her newborn baby boy next to rubbish bins, in a bag. The mother told police she already had four children and couldn’t afford another.

Sanook reports that Pho Kaew, Nakorn Pathom police were called after the baby was found in between two rubbish bins. The boy was taken by police to be examined at the Sampran Hospital.

Police checked CCTV footage and tracked the mother back to a house in Samut Sakhon, west of Bangkok. She was also taken to hospital for a medical check. Police described her state as ‘exhausted’.

The mother admitted that the baby had been born in her toilet earlier on Wednesday. She had cut the umbilical cord herself and then travelled with her grown son to leave the baby in Sampran. She said she already had four children and was unable to care for a fifth. She was hoping someone would find the child and take care of him.

The woman has been charged with abandoning a child under 9 years of age.