A woman has had a lucky escape after nearly reversing her car off the fourth floor of an office car park.

The Bangkok Post reports that this is the second time a driver has repeated the feat at the car park of the Food and Drug Administration in Nonthaburi, north of Bangkok.

A year ago, a driver sent his truck plunging from the sixth floor of the same car park, after starting the engine while the vehicle was in reverse. Fortunately for him, he was outside of the truck at the time and managed to let go before it pulled him to almost certain death.

This time round, a woman driving a new white Toyota C-HR was attempting to park it when she accidentally reversed over the wheel stop instead, smashing a chunk out of the wall and causing the back wheels of the car to drop over the edge of the car park, four floors up. Luckily, the front wheels were stopped by the wheel stop, but the car was left balancing precariously.

The woman says she was unable to open the driver’s door as it had been crushed by a pillar, but another person in the car park managed to help her escape through another door.

Speaking to the Bangkok Post later, the woman says she was parking her car when she heard a loud bang, which caused her to hit the brake hard (she thinks it was the brake). She says she only bought the car a month ago and has many years of driving under her belt. 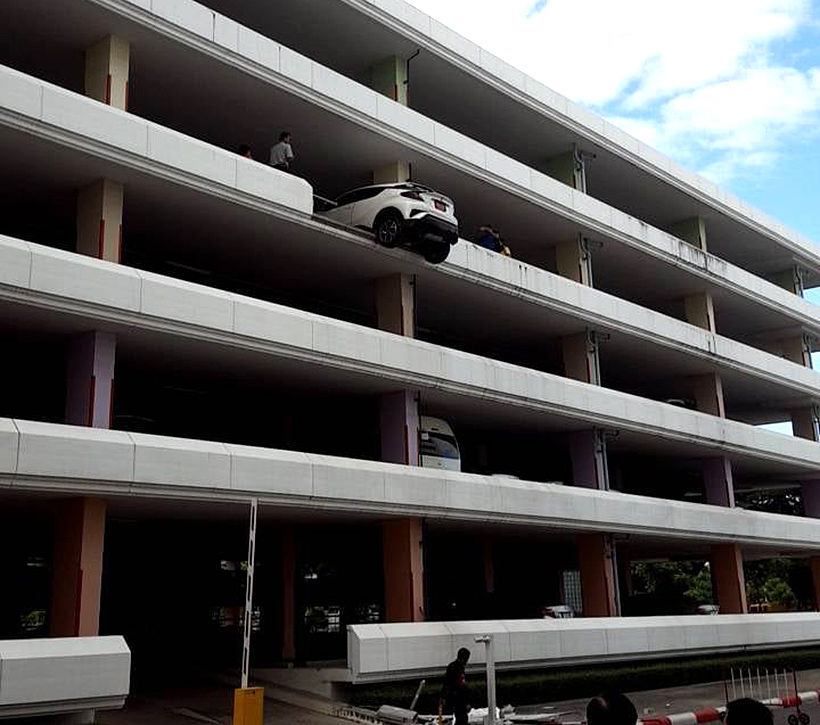 Thai bank returns 10 million out of 13 million stolen. “Sue us for the rest”