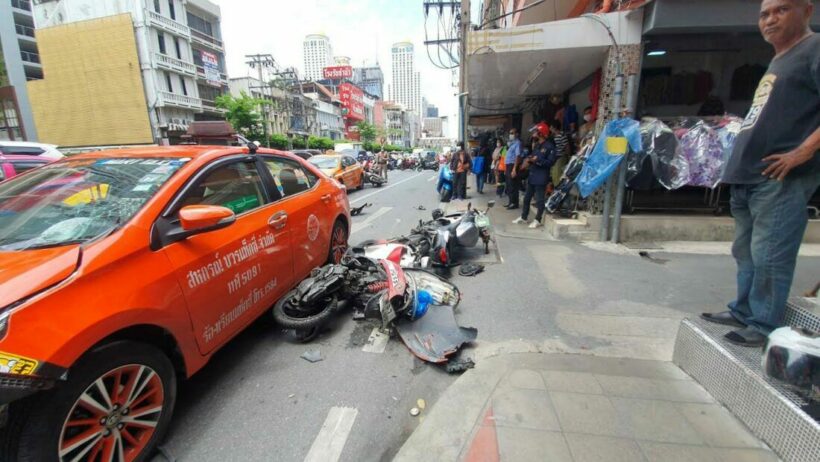 A taxi driver’s brakes failed as he pulled up to a queue of traffic at a red light in Bangkok earlier today, causing a crash involving 10 vehicles. Four people are injured including a motorbike driver who is in a critical condition.

Jeerasak went to the scene with Ruam Kattanyu Foundation to find that one motorbike driver was seriously injured after he was flung underneath a parked taxi. He is being treated at hospital.

As the 60 year old taxi driver Khampai Torson approached the red light, he tried to slow down but his brakes failed, causing him to crash into the back of a queue of vehicles including four bikes and five motorbikes which were all badly damaged in the accident.

Police detained Khamphai and took him to Phaya Thai police station for questioning and to undertake further legal proceedings.

cockneyboy
i think failure to break as opposed to brake failure. easy to check which
HiuMak
Well he will be in for a long "BRAKE" after this.
Fanta
14 hours ago, Thaiger said: received a report of an accident involving several vehicles That’s part of the problem right there. Blame transference.  It is a collision, it is not an accident. The driver at fault will blame his brakes…
Prosaap
Yes in this country its probably the fault from the other cars and bike if the are not there they can not be hit by the blind taxy driver who not like to drive slow by the looks of it…

ThaiEyes
Speeding, texting, drunk or maybe all three. Brake function is usually easy to check even after an accident, but you can’t easily tell whether a driver actually put his foot on the brake pedal at the right time or not…