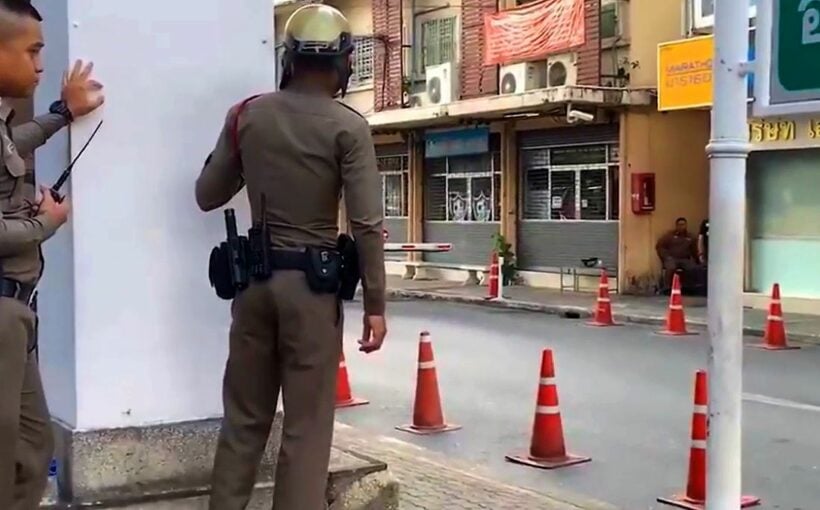 Police say that a 40 year old man has now been caught after a series of shots, more than 20 according to eye witnesses this morning. Shots were fired from a sports clothing store in Sio Chula 10, close to Chulalongkhorn University, in Bangkok’s Pratumnam district. No one was injured. (Video of the stand-off below from the Bangkok Post)

Police cordoned off the area as traffic and passers-by were moved away from the crime scene. The man began firing shots out of his shop around 4am.

One witness reports that he was sitting with friends when he heard shots from the rooftop of the two-storey sports clothing shop. A shot was fired in his direction, causing the group to immediately scatter. Police say the man was firing shots into the air.

Police were eventually able to talk the man down at 10.40am. He was then escorted to the nearby Pathumwan police station. Police say the man “was stressed out by family problems”.

Police in Bangkok have reported that they are searching for a 40 year old man who has allegedly fired more than 20 gunshots in public space close to Chulalongkorn University this morning.

Eyewitnesses claim they heard the gunshots in the Pathumwan area, on Chula Soi 10, near Chulalongkorn University. At this stage the situation is unclear whether anyone has been injured as a result of the unfolding incident. The reports of another shooting incident comes just days after the mass shooting in Korat, Nakhon Ratchasima which killed 29 and injured up to 50 others.

The Thaiger will keep you up to date with any developments.