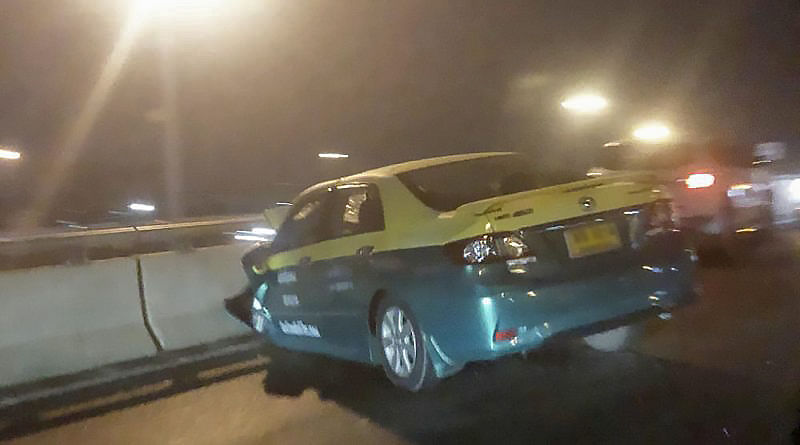 PHOTO: The scene of the crash - Sanook

A girl leaped from a moving taxi yesterday, possibly saving her life, as the car immediately crashed into the tollway wall, causing a 4-car pileup. The taxi driver had fallen asleep. The incident occurred on the north tollway at the Rangsit-Nakhon Nayok province intersection northeast of Bangkok.

The girl posted on Twitter that the taxi driver was in a deep sleep and she tried to wake him. When the driver opened his eyes, he didn’t brake but continued driving.

“If anyone saw a person jump out of a car onto the tollway that was me. The story is, I called a taxi to go back to my condo in Rangsit. Suddenly the car collided with the tollway wall and I thought in my head that I was surely going to die. I kind of lost it for a while and tried to wake the driver up. I shook him and even slapped his face to wake him up. He was sleeping, and when he finally woke up and heard me tell him to stop, he asked why should he stop the car? I kept slapping him until he finally slowed down, which is when I opened the door and jumped out.”

“I saw my mother’s face floating in front of me. After crashing he was still trying to drive. My body was shaking so much, I was hugging my bag while the car was still moving. Many cars slowed down to see what was happening and a nice person delivered me home.”

The passenger wrote that before the moment of the accident, she notised that the car was weaving back on the road. She was frightened for a while before jumping out onto the road. A passing motorist saw her jump and took her safely to her home. The passenger went to hospital and filed a police report.

Best eateries in Bangkok’s Chinatown and beyond