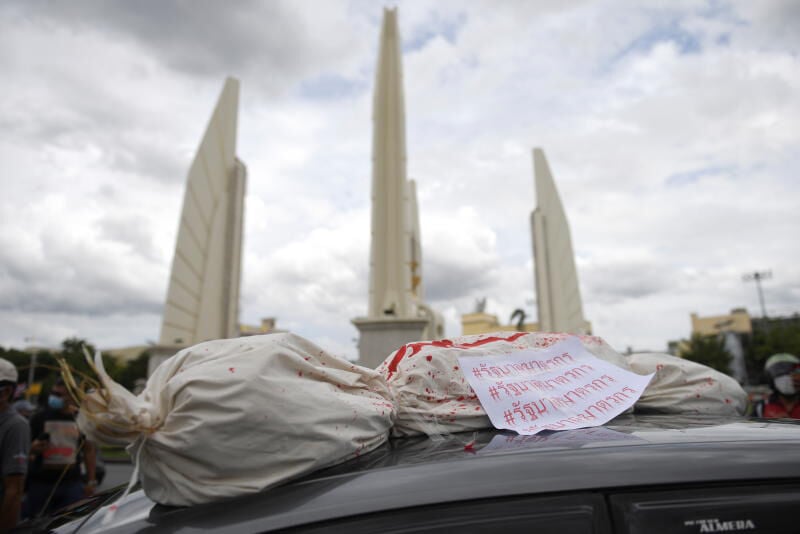 Despite new restrictions banning gatherings of more than 5 people in dark red zones including Bangkok, increasingly angry protests are calling for the removal of PM Prayut Chan-o-cha amid his government’s Covid-19 failures. The government enacted a prohibition on gatherings, saying that skyrocketing Covid-19 infections motivated the rule, though many question the timing of the order on the eve of planned large-scale anti-government protest.

Flouting the new rule, the streets were filled for a march from Democracy Monument on Ratchadamnoen Avenue to Government House with hordes of people walking the streets interspersed with motorbikes and vehicles in the car mob style protests used the last several weekends, honking horns and making noise down the streets. The Free Youth movement gathered the crowd at the monument and began their march to protest the government, continuing demonstrations that started one year ago last July.

The original demonstrators were protesting the coup 7 years ago that had become a long-term government, calling for PM Prayut to be deposed a democracy to be installed. While the mostly young protesters had decent support from the general public, the deterioration of the handling of the Covid-19 pandemic has persuaded many on-the-fence people and even former supporters to lose faith in the government and call for its removal.

2,000 police officers were on hand to try to wrangle and control the protesters who bucked the ban on gatherings that has been extended to August 2 and created increasingly provocative symbolic gestures to fuel the anti-government sentiment. The Metropolitan Police Bureau removed a number of PM Prayut effigies at Democracy Monument before they could be burned as the crowd intended. And fake body bags were left strewn around to represent all the Covid-19 victims they say could have been prevented with more competent governing.

colinneil
Somebody needs to teach the people here about Iranian history 1979, you know When Ayatollah Khomeini arrived at Teran airport thousands upon thousands where there to greet him. Authorities were helpless to stop them, that is what is needed here mobilization…
javada88
Try to imagine this. Police (2000 strong) opposing protesters.  The police of course will adhere to the rules. Meaning they will oppose the protesters in groupes of no more then 5 persons, each person in such a groupe making certain the…
DiJoDavO
8 hours ago, BookShe said: Almost every Thai has a firearm. I've talked about this recently and got to hear that it's nearly impossible to get one. It's not just like a driver's license which you get after showing you…
harry1
14 hours ago, AlexPTY said: Do they know who the deputy of the Prime Minister is?  do you know yourself,there are 15 dpm and very difficult to remember all
HolyCowCm
12 hours ago, Stardust said: Also by foot but I dont know if you watched the livestream then you will understand better the situation  CM by foot? If so did not see it. Only saw the vehicles as I was on…

Foreigners over 75 can get a vaccine at Bang Sue Bangkok