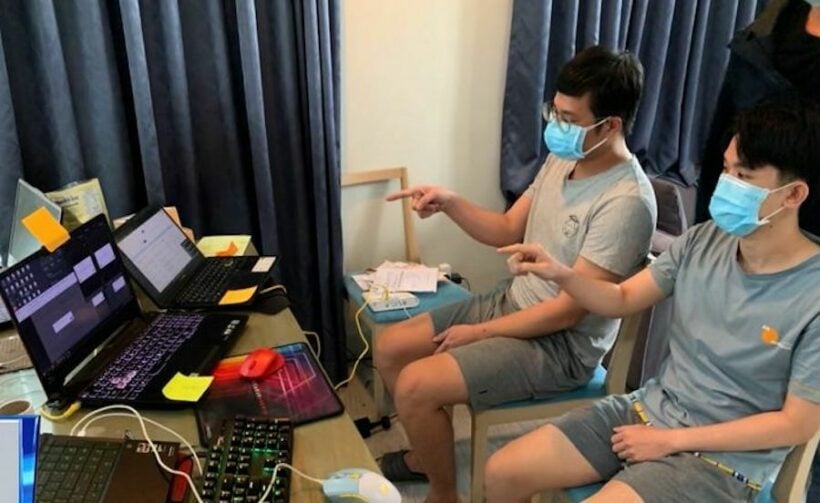 Two Chinese men have been arrested for allegedly defrauding more than 1,000 people for more than 2 billion baht by luring them in to make high investments on an online shopping application. Police in both Bangkok and Chiang Mai received complaints from those who had lost money in the alleged scam.

According to the chief of the 191 Patrol and Special Operation Division, Pol Maj Gen Somboon Thiankhao, the two suspects have been found at their condominium in RamIntra district after following complaints and have been identified as 34 year old Chen Yirong and 20 year old Lin Bin.

During questioning, the two suspects told police that they came to Thailand to work in the financial services for a monthly pay of 30,000 baht each and reportedly denied that they had misled others.

Now they are being charged with exploiting electronic money and operating without work permits in the kingdom and have been transferred to Khok Kram police, along with all of the things confiscated, as the investigation was expanded to find their collaborators.

After an initial investigation by police, investors would be enticed to show their interest in the scheme before being defrauded of their next payment on the app.

Fanta
2 billion baht from 1,000 people = 2 million baht per “investor”. Even double the amount of people and it’s a million baht each. I know inflation is on the rise but 60 million bucks is a lot of money. This…
Stonker
21 minutes ago, Fanta said: This pair are either clever idiots or pawns. Or both ... 😂.

riclag
Can you imagine! Seriously! Omg ,to be a victim of fraud !
HiuMak
I do hope they get their karma