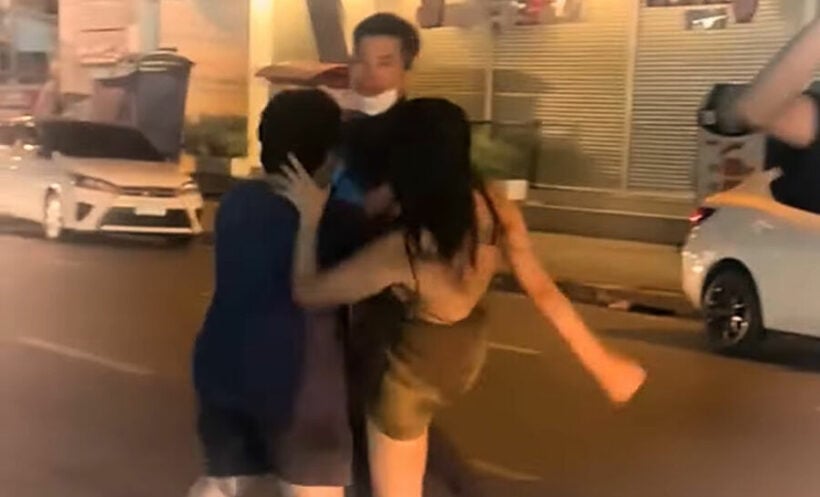 A man who poured beer over a woman who turned out to be a professional boxer, has just been fired from his job at a top Bangkok hotel. Not a good week for the unnamed perpetrator, who hit the headlines thanks to the power of social media and a video that went viral. The incident occurred at a food court in the Huai Kwang district of the capital when the hotel worker, who was off-duty at the time, approached 24 year old Pareploy Saeaia and tried to clink glasses with her. The woman refused and the man moved off, only to return a few minutes later and pour beer over her head.

The outraged woman, who had been eating with friends, followed him out into the street, where she proceeded to aim kicks and punches at him. Pareploy is a professional Muay Thai fighter who has won 40 out of 50 fights and has been winning medals at a national level since 2013. According to media reports, she now works as a Muay Thai trainer.

Following the incident, Pareploy filed a police complaint, but both parties appeared to settle their differences when they met at Huai Kwang police station, where they apologised to each other and paid fines of 1,000 baht each.

The Bangkok Post reports that the man said he was drunk and hadn’t meant to offend the woman. The report goes on to say that the man vowed to quit drinking. Unfortunately for him, the story doesn’t end there, with his employer, the Swissotel Bangkok Ratchada, having just fired him. His sacking has been confirmed in a statement from the hotel.

“The hotel does not support the employee’s inappropriate behaviour both during and outside working hours.”

JamesR
21 hours ago, Poolie said: They ate with the fork in their right hand. Using it as a shovel. Ah yes, if you watch any American film they eat that way, upturned fork and in right hand only. I have…
JamesR
7 hours ago, Stardust said: My farang friends often from the second or 3rd generation, born and raised in Thailand. For sure the european comunity is by far not how you describe them. Did you ever thinkin where all these…
Stardust
44 minutes ago, JamesR said: So I suppose all the servants etc do their job just for fun and then at the weekends they return to their palaces in the countryside. There may be lots of German companies but 99%…
astro
7 hours ago, LoongFred said: Being poor in Thailand is a personal choice. With education opportunities are numerous, but hard work is needed to succeed. It rather is something one is born into. Education needs to be paid for, difficult…

steve860
19 hours ago, LoongFred said: I know many Thais from all (most) walks of life. Some are quite rich but you would have a hard time knowing it. Some try to act rich but aren't. I have also known high…