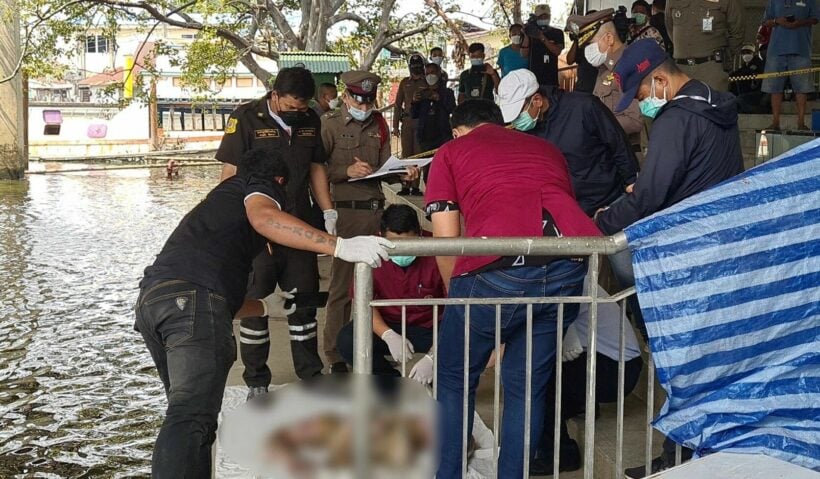 Human body parts, including a head, were found in canals connecting to Bangkok’s Cha Phraya River yesterday. Investigating officers say the body is believed to be a 28 year old woman who went missing on Monday.

Officers initially launched a murder investigation, but have since said the death was suicide after reviewing CCTV footage which showed a woman jumping off the Rama 8 bridge on Monday afternoon. Police suspect that the woman’s body was cut by a large ship propeller.

It’s been reported by the Ruam Katanyu Foundation that the left leg, upper torso and head were found at different locations. Reports say the torso was the first to be found near Arun Amarin bridge in Bangkok Noi midday yesterday. The head was then found floating by Ansorissunnah Royal Mosque in Bangkok Noi. According to the police, they discovered that the throat had been sliced with a sharp object. Her legs were found at the piers of Noi Nai Temple and Hong Rattanaram Temple.

The woman’s relatives were able to identify the remains by looking at the tattoos and accessories the woman was wearing. They say she went missing earlier this week.

HolyCowCm
Too bad. Lot's of this killing themselves going on and surely to be lots more in these dark Wuhan Flu bad economic times. Yesterday or the day before the thai news showed someone floating away in the water who had…

PapayaBokBok
Yikes that blurred image is almost NOT blurred enough-----(shudder)
DiJoDavO
Whatever happens to someone in Thailand, the first thing the police consider is suicide. Ok, it might be, but throat cut, body in pieces... That doesn't look like suicide at all, and yet, that's all what's mentioned here.

Criminals pretend to be police, scam Swiss man in Phuket

Insurance companies “hesitate” to give Covid-19 insurance to foreign tourists