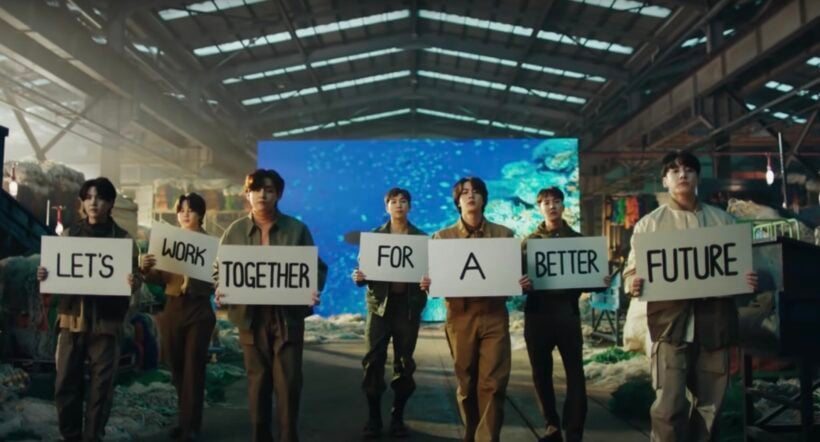 In a new music video, South Korea’s BTS is promoting the recycling of ocean-bound plastics and the use of eco-conscious packaging for the new Samsung Galaxy S22 Series smartphones.

The MV capped off last night’s Galaxy Unpacked 2022 event, which saw the release of Samsung’s newest devices, with an eco-friendly emphasis on their Galaxy for the Planet initiative and the plan to reuse ocean-bound plastics to create plastic components in their manufacturing ecosystem.

In their latest collaboration with Samsung, “Galaxy x BTS: Galaxy for the Planet,” each of the 7 members of the group is seen holding stacks of cards in a series of messages against a backdrop montage marine life as they wander through a warehouse full of presumably discarded fishing nets.

In the decidedly somber video, the boys do not sing or dance, as they raise awareness about the problem of plastics in the ocean and the need for people to join together to engage in environmentally friendly practices, such as rethinking the lifespans of their products and repurposing old devices.

The BTS boys, which have nearly 60 million followers on Instagram, besides each member’s personal IG account, have been Samsung’s official global brand ambassadors since February 2020, when they first promoted the Galaxy S20 series of smartphones. BTS won ‘Artist of the Year’ at the recent American Music Awards and have been one of the most successful world pop acts over the past 4 years.

Read their full message from the ‘Galaxy for the Planet’ MV…

Last year, Samsung removed the charger from their phone boxes, following an industry-wide practice begun by Apple, which they had previously mocked.

The video highlights its Galaxy for the Planet sustainability campaign, launched in August last year. It outlines four near-term goals to achieve by 2025…

“Samsung is fully committed to minimizing the environmental impact of its products throughout the entire lifecycle of its smartphones, from the design to the production stage through to their usage and disposal, in order to ensure that Galaxy smartphones contribute to greater environmental sustainability,” Samsung wrote in a press release on their website yesterday.

“Samsung is consistently working to achieve a circular economy by reusing and recycling resources in order to build a better Galaxy ecosystem.”

Reducing the amount of plastic used in smartphone packaging is one way the company aims to become more sustainable. They cited the plastic volume of just 4 percent from last year’s S21 packaging weight, a 49 percent reduction compared to the packaging for 2017’s S7 model, as well as the 42 percent reduction of paper contents, which they claim has saved nearly 45 thousand trees a year.

The company said it will eliminate all plastic materials from its product packaging while using recycled materials in all products that fall under the scope of its Galaxy for the Planet campaign — namely smartphones and chargers — by 2025.

“Samsung has succeeded in transforming discarded fishing nets, a major contributor to marine pollution, into a material with which to produce smart devices, and the company plans to apply this material to all its products in the future.”