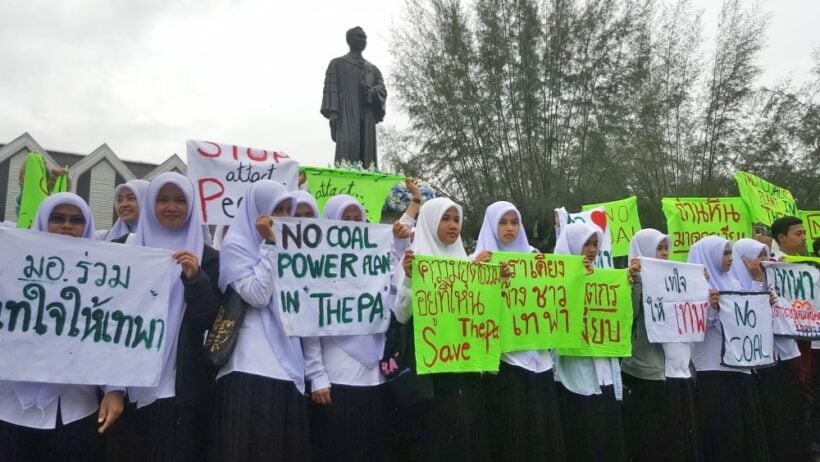 Representatives of the Thepa coal-fired power plant opposition group went to the UN offices in Bangkok yesterday to report their concerns about the project.

The group also emphasised in a statement that it would continue its prolonged peaceful demonstration in front of Government House every day until the government definitively revokes the 2,200 megawatt coal-fired power plant project in Songkhla’s Thepa District and withdraws its case against 17 activists.

Dr Suphat Hasuwankit, director of Chana Hospital and a prominent opponent of the Thepa coal-fired power plant, said five representatives of the group met with UN officials to voice their concerns about the project and the impacts of the conflict surrounding it.

“There are three main topics that we raised to the UN,” Suphat said. “These are the environmental impacts of the coal-fired power plant project, the enforced eviction of more than 1,000 people from their homes to open up land for power plant construction, and the litigation against people to make them abandon their campaign against the project.”

He said the group had taken their concerns to the UN because it was at the forefront of the global effort to tackle climate change, to which burning fossil fuels such as coal was a major contributing factor.

“Not only will the coal-fired power plant emit a large amount of greenhouse gases into the atmosphere and worsen climate change, there are also several pollutants from the plant that will significantly harm the local environment and people’s health,” Suphat said.

“Moreover, the entire Bang Ling village, which has more than 200 families, will have to move against their will, depriving them of their traditional livelihood. Recently, 17 activists were also arrested for just trying to campaign against these issues in the presence of the prime minister.”

The opposition group released a statement yesterday saying that it was pleased about premier General Prayut Chan-o-cha’s decision to suspend the project and promise to help regarding the case against 17 activists.

However, they said Prayut’s promises were too vague and there did not involve an assurance that the government would keep its word.

For that reason, the group said it would continue its peaceful protest until its demands for the total cancellation of the power plant and the withdrawal of the case against 17 activists were fulfilled.