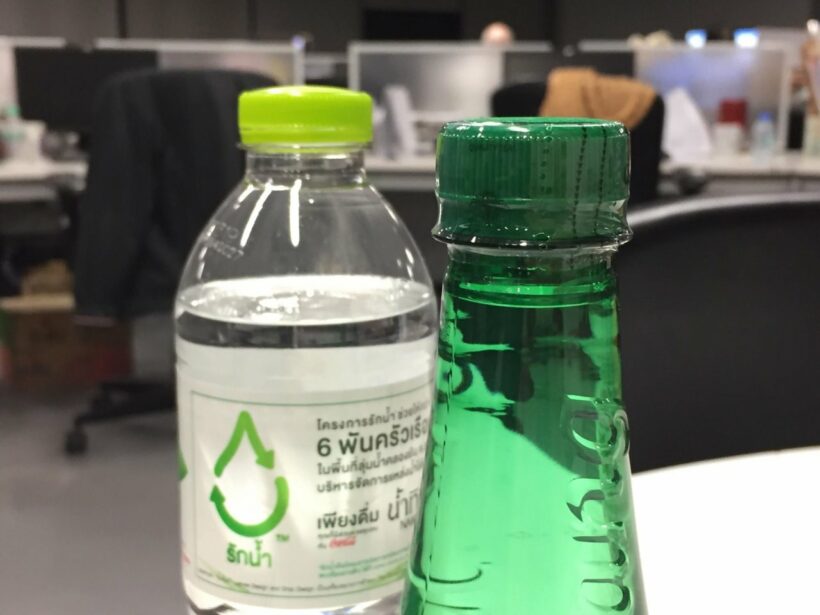 Thai bottled water producers have responded well to a plan to stop using cap seals, which will not only decrease plastic waste but also reduce unnecessary production costs.

In a campaign kicking off today, the Pollution Control Department plans to totally abandon the use of cap seals on bottled water by the end of 2019.

Sermsuk announced on its website that as one of the leaders in the bottled water business, it was aware of the importance of cooperation from the business sector in tackling the plastic waste problem by helping the authorities decrease unnecessary plastic usage.

The company said that every product that comes out of its production line from today would be without a cap seal.

Sermsuk assured the public that even without a cap seal, its product quality would remain high because the production process was the same.

It’s not only the big players in the market that have embraced the campaign. SMEs in the bottled water industry, which number more than 2,000 operators and brands across the country, are also happy to participate.The managing director of the Hima brand, Aim Chato, said his small enterprise had also joined the PCD campaign.

“We have heard the authorities’ policy to stop using cap seal and we are very happy to comply with this new regulation, as we also want to save the environment and decrease plastic waste,” Aim said.

He added that this policy not only helped the environment, but also benefited business operators. Stopping the use of cap seals would decrease his company’s production costs up to 2,000 baht per production lot of 20,000 bottles.

“We also sure that without the cap seal, consumers will still have high confidence in our product, because we have high quality production standards that ensure that our bottled water is clean. They are similar standards to those of the top water brands,” he added.

Meanwhile, Wanchai Srithongkham, a food safety expert from the Food and Drug Administration (FDA), said that the Public Health Ministry required bottled water to have certification from the FDA to ensure it passed both quality and safety standards.

Wanchai said that a cap seal was not a requirement under the ministry’s regulations, so even without the seal consumers could be sure that any FDA-certified product was safe for consumption.

PCD director-general Sunee Piyapanpong said earlier that the elimination of cap seals on bottled water was part of a mission to reduce plastic waste as a whole.

This was because the seals were made from polyvinyl chloride plastic, which is very small and thin. This makes it very hard to collect and recycle, meaning that most of it ended up littering the environment and causing many subsequent problems to the ecosystem, Sunee said.

According to the PCD, about 4.4 billion bottles of water are produced in Thailand every year, and 60 per cent of them have cap seals, generating 2.6 billion pieces of small plastic waste annually.

By implementing a total cap seal ban by the end of next year, Thailand can reduce up to 520 tonnes of unnecessary plastic waste.

Countries that have already abandoned the use of cap seals include Malaysia, Indonesia, Singapore, China, South Korea, Japan, and most European nations.

90 bikes and 90 motorcyclists bailed up in Bangkok