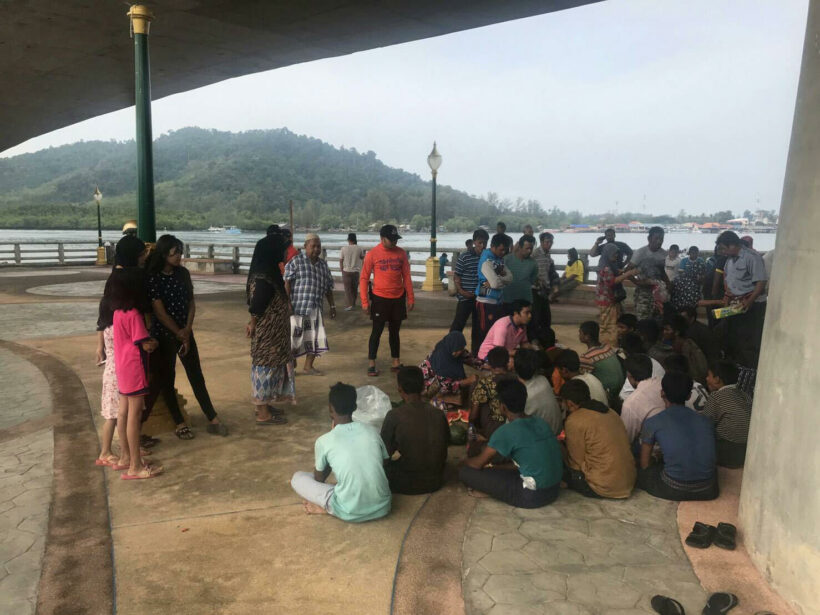 The 56 Rohingya boat people, including 19 men, 18 women, 8 boys and 11 girls, were brought by Royal Thai Navy Officers Area 3 and police to Sirilanta Bridge, the bridge linking Koh Lanta Noi and Koh Lanta Yai, for investigation after they were found at Koh Ha early on Sunday morning.

After checking that they weren’t involved in any human trafficking activity the officers escorted them back to their boat to continue their voyage to Malaysia. Many local people donated food and personal items to them.

Pol Col ML Pattanachak Chakapan, Koh Lanta Police Station Superintendent, said that they were heading to Malaysia but there was a storm and strong waves along the way on Sunday afternoon which made them head for cover in the lee the island.

In the meantime, the UN High Commissioner for Refugees (UNHCR) yesterday voiced concern over the plight of the 56 Rohingya boat people who landed on the Thai southern islands and were pushed back to sea by Thai security authorities.

Pol Colonel ML Pattanachak Chakrabandhu, superintendent at Koh Lanta police station, told Nation TV that the boat left Rakhine state in Myanmar, where the Rohingya face heavy persecution by local authorities, with the goal to reach Malaysia. They docked in the southern Thai province due to the bad weather.

An initial investigation found only Rohingya in the boat and no signs of human trafficking, Pattanachak added.