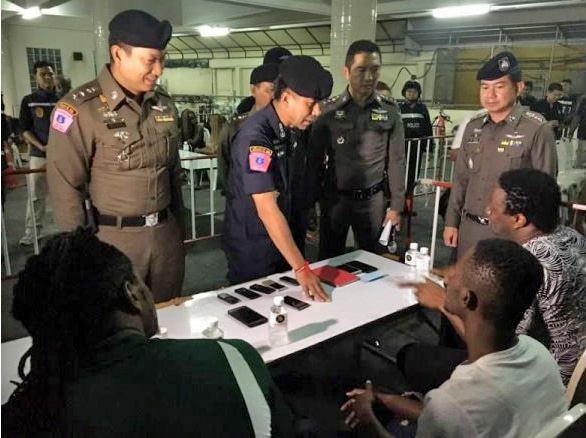 Immigration, narcotics and 191 police jointly searched 10 locations in Bangkok early on Monday and arrested 52 Nigerians, Tanzanians and Uzbekistanis on various charges.
The operation was led by Pol Maj-General Surachat Hakpal, deputy commissioner of the Tourist Police Bureau. The searches were jointly launched by over 200 policemen from the Immigration Bureau, the Patrol and Special Operation (191) Division and the Narcotics Suppression Bureau. Two of those arrested were charged with unlawful entry to the kingdom, 11 with overstaying their visas and 27 with suspicion of being involved in drugs trafficking, Surachet said.
One of the suspects was charged with deceiving Thai women in a romance scam and another with smuggling a banned good. Surachet said police were keeping an eye on groups of black migrants and tourist because, he alleged, many of them had carried out various crimes in the kingdom, including using skimmer device to clone ATM cards, money laundering and involvement in human and drugs trafficking.
Surachet said one of the arrested had been previously jailed and released for being in possession of cocaine. He would investigate why the suspect had not been deported, said Surachet.
STORY: The Nation