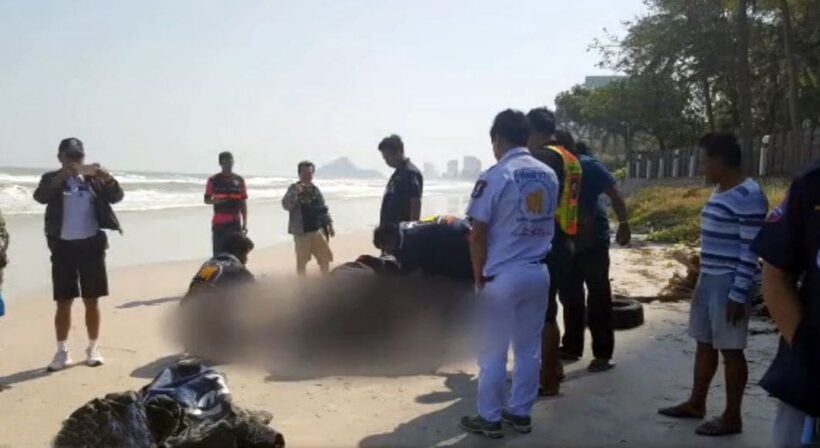 An Irish tourist has drowned in the sea at Prachuap Khiri Khan’s Hua Hin District after a kiteboarding accident during rough seas.

Pol Captain Jaruak Khongkarien, Hua Hin Police Station investigative officer, said on Wednesday that police received a report of a drowning in the sea near the beach at Soi Hua Hin 77. When they arrived, they found that the body of a 40-year-old tourist of Irish nationality known only his first name, “Jonathan”, had already been brought back to the beach. From interviews with employees of a nearby kiteboard-hire shop, it was found that Jonathan rented a board to surf alone in the sea at noon.

Not long after, tourists on the beach saw that he had made a hand signal asking for help, so shop employees rushed to save him. After reaching Jonathan, the rescue team found that his leg was locked with a buoy used to designate the swimming area.

It was reported that there were strong winds and waves that caused the accident and made it very difficult to free the surfer from the buoy. The rescuers told police that when they finally brought Jonathan back to the shore and tried to revive him, he was already dead. Investigative officers concluded that Jonathan had died before his body was brought to the shore. The body was sent to Hua Hin Hospital, while officers contacted his family to inform them of his death.

Tourists have been warned against playing watersports in the sea due to the dangerous conditions brought about by the northeastern monsoon and the approaching storm, Kai-Tak. However, it was reported that many tourists ignored the warning and went kiteboarding at Hua Hin and Pranburi beaches, because the strong winds and waves are preferred by kiteboarders.