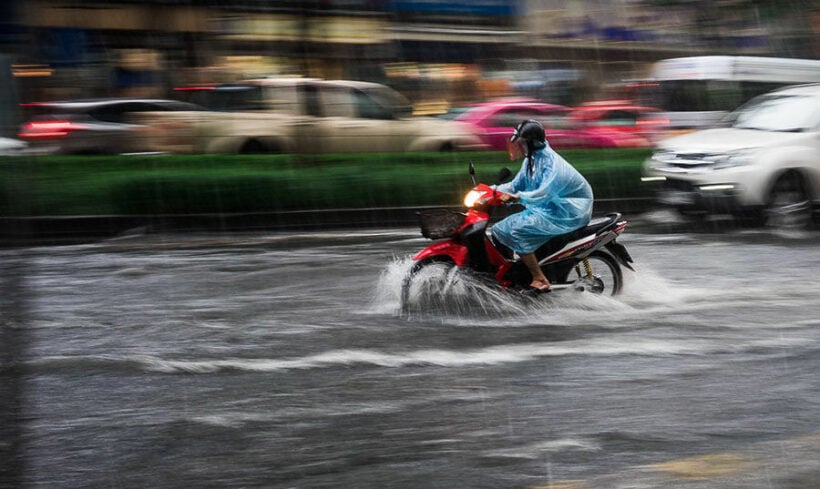 Batten down the hatches, there’s some heavy rainfall coming in the next 24 hours and most of the country will get it. The Thai Meteorological Department says the approach of Tropical Storm Conson means most regions are in for some very wet conditions. Conson is currently moving in a north-westerly direction, across the central Philippines, headed for Vietnam. Over the next 24 hours, there’s a 70% – 80% chance of rain across all parts of the country, with the exception of the South. The heavy rainfall is expected to continue until Monday of next week.

According to a Bangkok Post report, the Royal Irrigation Department has warned of the risk of downstream surges in rivers, which could be triggered by torrential downpours, including in Bangkok’s Chao Phraya. Prapit Chanma from the RID says all irrigation projects in areas likely to be affected have been ordered to monitor water levels.

The report goes on to say that in the north-eastern province of Nakhon Ratchasima, all districts have been ordered to monitor the water levels of reservoirs, with some of the smaller dams already full. Governor Kobchai Boon-orana says recent rainfall means that the smaller-sized reservoirs have already reached at least 60% of their capacity. However, a number of larger dams can still take more water, provided there’s no repeat of the torrential downpours that struck the province last year.

AdvocatusDiaboli
1 minute ago, WaccineChinawatiiRaporn said: very good, thank a lot! I noticed the one you posted has a very lagged time display of the radar pictures,  minus 6 to 12 hours depending on the region. Something to note.
WaccineChinawatiiRaporn
Yeah, I think besides Bangkok most of the other ones are pretty useless
MikeW
4 hours ago, AdvocatusDiaboli said: So now the landlords know this rent prices will rise along Soi Buokaw. Soon you will see longboats instead of baht buses. And wave runners in stead of motorcycle taxis
Fester
5 hours ago, AdvocatusDiaboli said: https://www.windy.com/-Weather-radar-radar?radar,1.304,103.855,5 not just a rain radar.  Yeah, they got other stuff too!