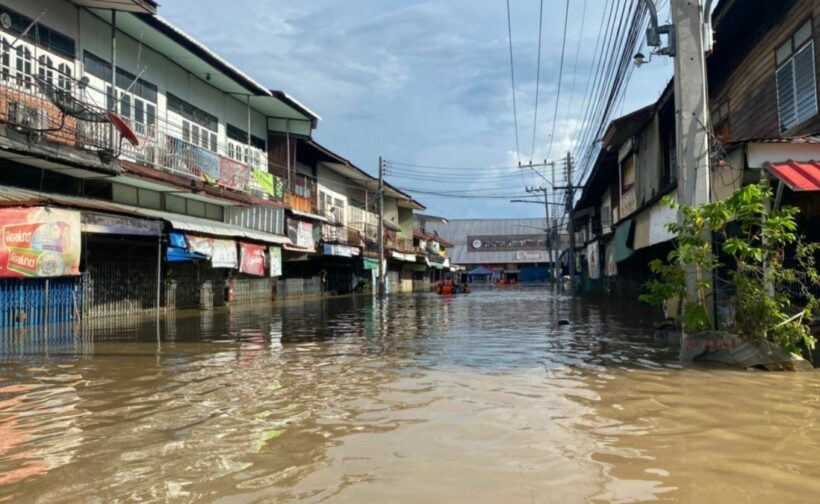 Around Thailand, riverside communities have been plagued with flooding as the high tides have raised water levels on the Chao Phraya River. In Nonthaburi and Pathum Thani, there are no floodwalls and residents are being warned against possible flooding again today. The Chao Phraya River will likely reach its highest level of the year with today’s high tide, bringing flooding to neighbourhoods along the river, according to the City Administration’s Department of Drainage and Sewerage.

In Pathum Thani, flooding has affected some neighbourhoods for over a week, with residents moving their valuables to higher ground and many around the Plubsutthavat Temple have moved to the second story of their homes as the lower levels are flooded.

In Nonthaburi, the municipality provided sandbags to the residents to build a makeshift flood wall, but the floodwaters have overwhelmed the sandbags and the water levels in some subdistricts is still rising each day.

More water is scheduled to be discharged from the Mae Klong Dam, placing low-lying regions in Ratchaburi and Samut Songkram provinces in danger of more flooding. The irrigation office there has warned residents of the area to prepare, particularly in the Ampawa district of Samut Songkhram and the Kung Namwon and See Muen sub-districts of Ratchaburi as the Mae Klong River overflowed due to the high tides.

In Ang Thong floodwaters are starting to subside, but 5 of the 38 villages in the province are still underwater. Irrigation officials have suspended operations on an excavation to remove excess water from the Bang Sala canal after villagers clashed over fears that the road could collapse from the heavy machinery in operation.

Meanwhile, yesterday Mae Klong Damvisited Uthai Thani with other officials to survey flooding in the province. The government officials also discussed how to bring relief to flood victims. The overflowing of the Chao Phraya and Sakaekrang rivers has left the Muang, Swang Arom and Taptun districts underwater since late September.

F5Brian
29 minutes ago, SSimpson said: "residence are being warned". Journalist? That wasn’t the only error. I wonder if they fired their editor or something.

palooka
15 minutes ago, F5Brian said: That wasn’t the only error. I wonder if they fired their editor or something.  Sunday have day off

Rain
1 hour ago, SSimpson said: "residence are being warned". Journalist? Editing, proof-reading and journalistic integrity is no longer required in our dumbed down existence.