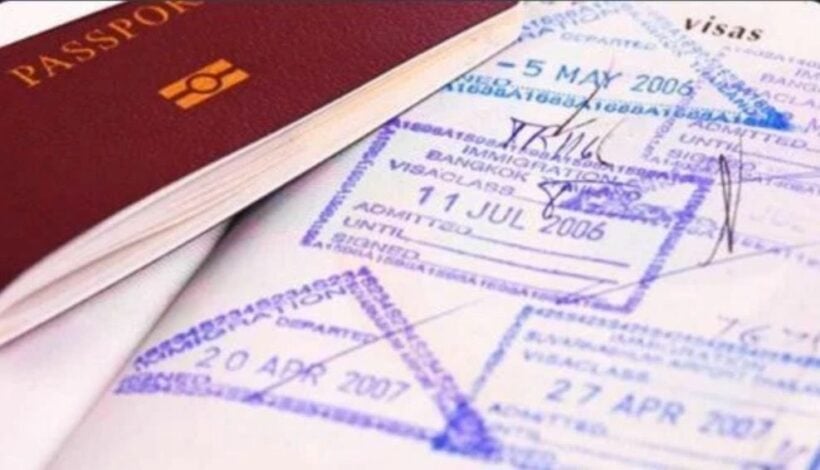 UPDATE: There has been no confirmation of the rumour that was circulating earlier today. Some publications even said it was a “done thin” but that is not true. The latest developments…

Speaking to khaosodenglish.com, Col. Phakkhaphong Saiubon told them that an extension should be officially announced this week and that “those who failed to renew their stay after the September 26 deadline will not be prosecuted”.

But an Immigration spokesman, Chengron Rimpadee, has told Coconuts Bangkok that “only foreign nationals unable to fly home because their home borders remain closed or there are no flights, can be in the kingdom legally”. Those that remain in Thailand “must have acquired letters from their embassy”.

Bottom-line on all this, assume that the visa amnesty finished on Saturday, as previously confirmed, until something else is confirmed about an extension. For now, without a valid visa, you are officially on overstay.

Meanwhile, the Thai government has confirmed that it will extend the country’s state of emergency until at least October 31 and approve the much-hyped special tourist visas starting in October. The Centre for Covid-19 Situation Administration has today approved the extension of the emergency decree and the approval of the new special tourist visas for foreign tourists. The meeting was chaired by the Thai PM Prayut Chan-o-cha.

Thai Immigration offices have been flooded with foreigners trying to find a last minute solution to stay in the country and figure their situation out before the end of the visa amnesty… September 26, last Saturday. The end of the amnesty, allowing visitors with lapsed visas to remain in the country, put many in a difficult situation, especially after a warning from the government the people could face fines and jail time for overstaying. But foreigners could have 1 more month to figure it out.

The news will come as a massive annoyance to those who went through the hoops last week to meet the deadline, although many thousands simply failed to get an appointment or satisfy the extension requirements, or simply had no flights to leave the country. In other cases, some embassies either refused to provide a letter supporting their extension or were slow in doing so. Many thousands, granted an extension, found themselves with a 14 day conditional extension, pending checks from Immigration.

Now there’s an “unofficial” letter, on official Thai government letterhead, floating around claiming that the visa amnesty will be extended until October 31. It’s said the letter is waiting to be signed by PM Prayut Chan-o-cha which would then be published in the Royal Gazette. The letter title translates loosely as “extension for foreigners staying in Thailand”.

The Thai Chamber of Commerce Chairperson Kali Sarasin told the Bangkok Herald that the government’s “uncompromising” stance toward foreigners in the makes no sense, especially since the coronavirus is still spreading, and flights back to their home country are still hard to book. Flights that are available are still very expensive.

Some foreigners are still scrambling to get a letter from their embassy and apply for a 30 day extension, and some are applying for expensive education visas and classes just to stay in Thailand for a long period (a common solution by visa agents). Others may have a job and just need to transfer their visa, but the immigration has yet to come up with a way for foreigners to basically restart their visa without leaving the country.

While foreigners staying in Thailand have been jumping through hoops to keep living in the country, the government has been crafting plans to get a new batch of foreigners in. The CCSA will today approve a new long stay tourist visa for those entering the country. The Special Tourist Visa is good for 90 days and can be renewed twice, adding up to around 9 months. But the visa still requires extensive paperwork as well as a 14 day quarantine in a government-approved hotel.

IMPORTANT: According to this unsigned document from the Ministry of Interior, Immigration is expected to extend the visa…

Posted by Richard Barrow in Thailand on Sunday, September 27, 2020

Thailand now has 29,473 active Covid-19 cases. Most patients with Covid-19 are asymptomatic or have mild symptoms. More than 1,000 Covid-19 patients are in critical condition including 380 people on ventilators.

Out of the 2,419 new cases, more than 1,000 cases were detected in Bangkok. Most cases were local transmissions or detected through active case finding.

Of the 19 new coronavirus-related deaths, most were in Bangkok and surrounding provinces. The majority of deaths were the elderly and many of them contracted the virus from infected family members or friends.

Over the past week, new clusters of Covid-19 infections have been detected in crowded Bangkok neighbourhoods, including the Klong Toey slum, Ban Khing and Bang Kae districts. Poor communities in Bangkok have been seen as vulnerable to coronavirus outbreaks as people live in close proximity to each other and many cannot afford to stop working to abide by stay-at-home orders. CCSA spokesperson Natapanu Nopakun says active case finding in Bangkok clusters have been “beefed up.”

With cases in Bangkok still on the rise, the current disease control measures imposed in the capital will be extended until May 17. Schools and entertainment venues must remain closed. 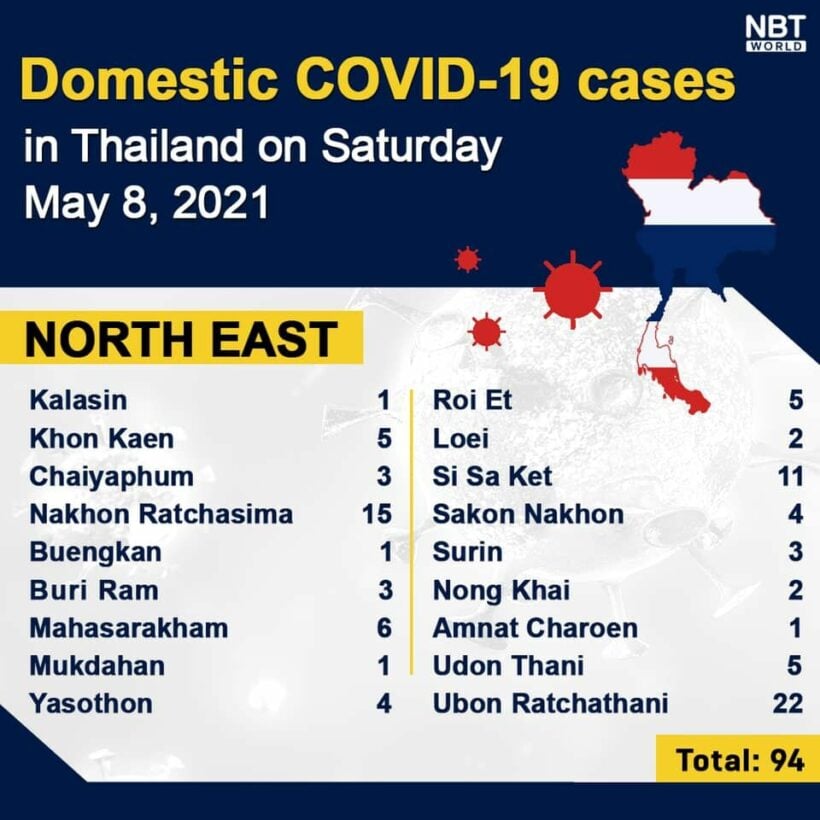 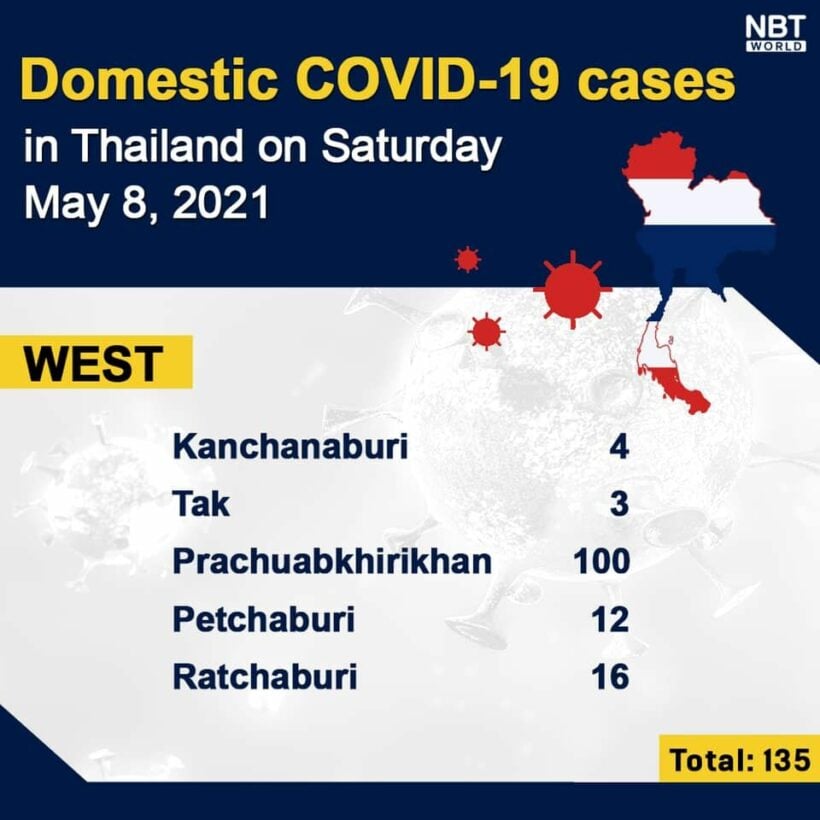 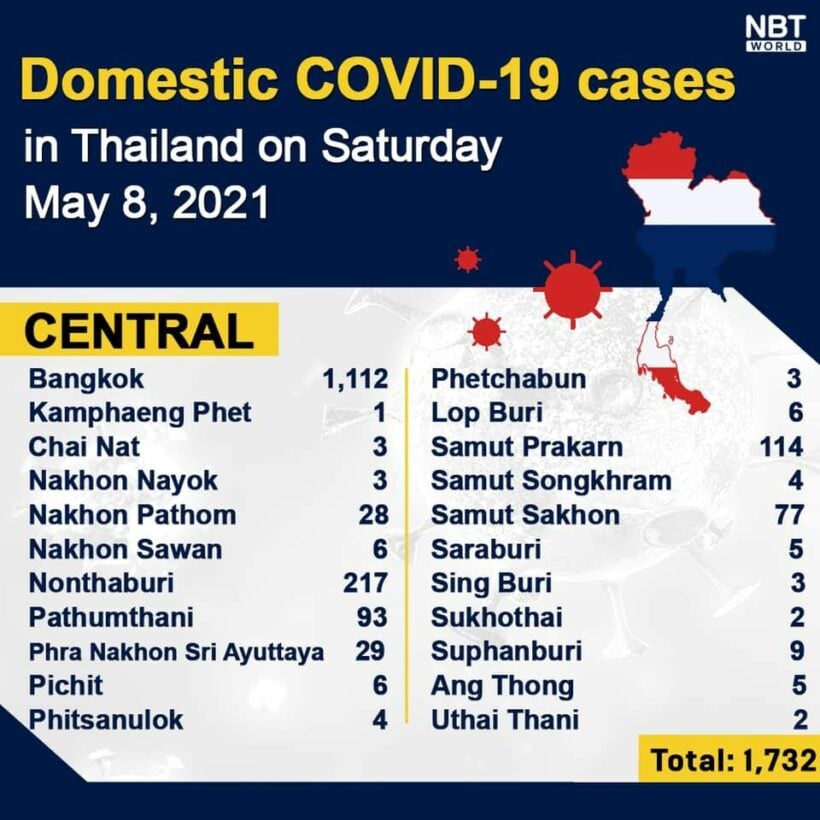 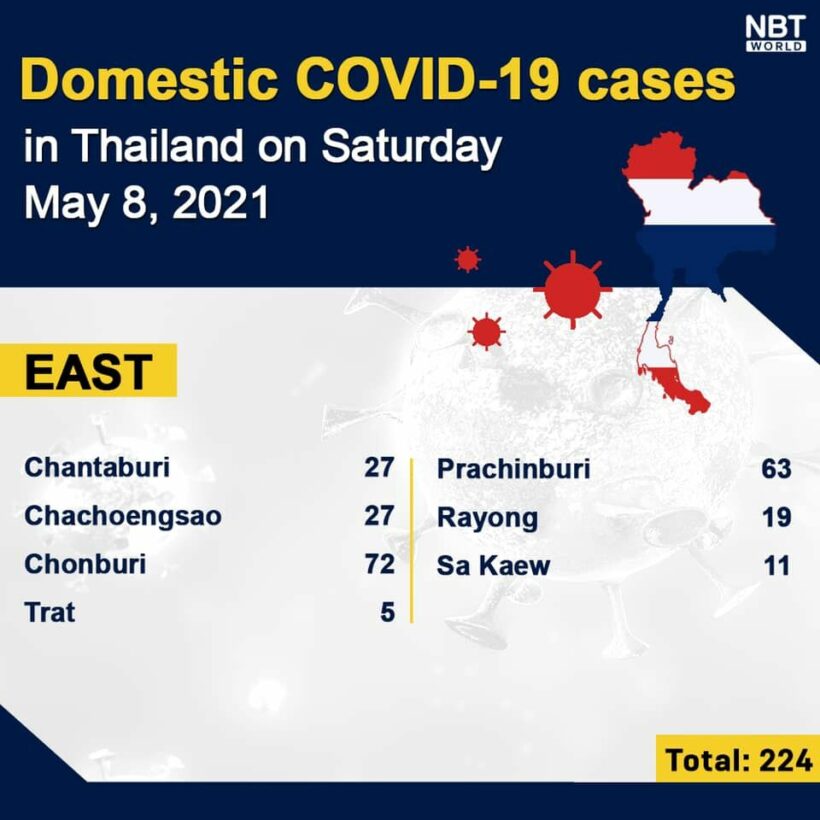 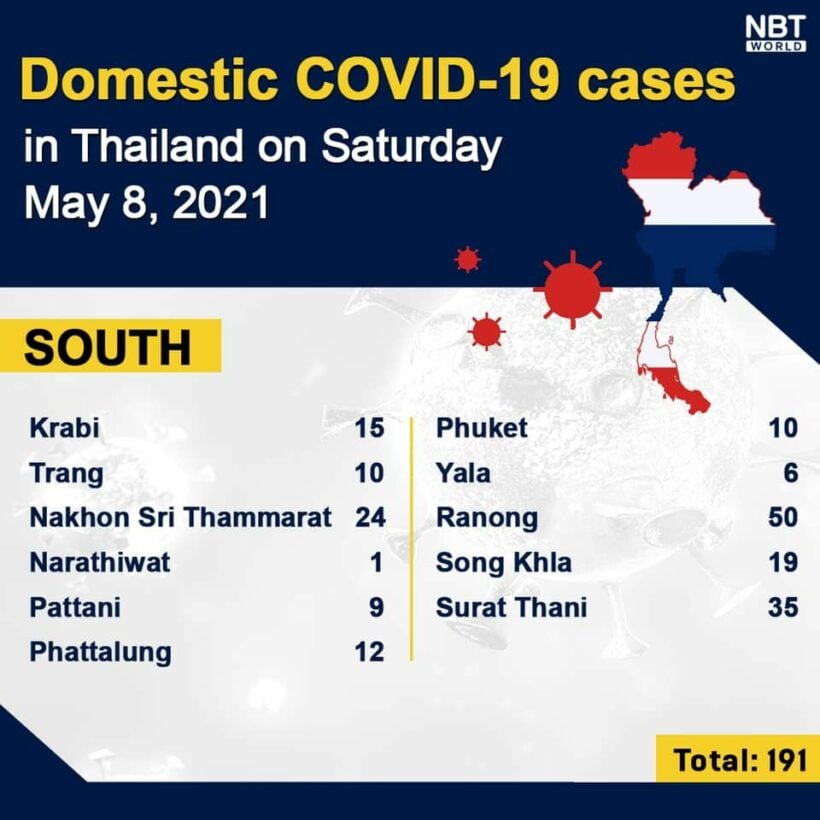 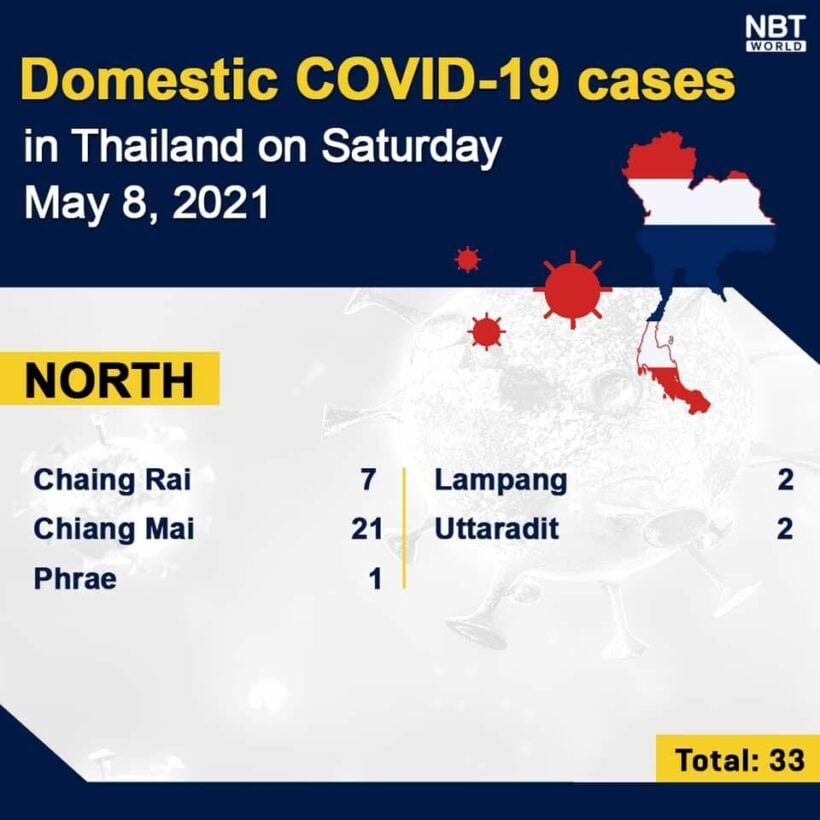 Active Covid-19 cases in Thailand as of 7 May 2021, according to Worldometers.

In 2020, Thailand was hailed worldwide for its iron-fisted lockdown that curbed Covid-19 spread almost completely. Thailand was the second country in the world after China to identify a Covid-19 infection in January of last year but managed to keep its numbers impressively low, at least until December’s second wave of outbreaks. That wave drove the numbers up to nearly 29,000 Covid-19 infections in a nation of more than 69 million people, from the onset of Covid-19 in 2020 to the end of March 2021. But its devastating third wave struck in April and in just 5 weeks that number has more than doubled to above 76,000 Covid-19 infections.

Daily infection rates are now hovering around 2,000 per day with 1,911 reported yesterday. When a new Covid-19 cluster was identified in the elite nightclub scene of Bangkok’s Thonglor district, 196 entertainment venues were closed for 2 weeks. But as the virus spread throughout the nation the closures followed too and soon all nightlife venues were closed indefinitely. As infections grew, the Thai New Year came and while most Songkran activities and events were cancelled, many people still went on holiday to cities or beaches or travelled to be with their families in their hometowns. Despite warnings and attempts at contact tracing and testing, Covid-19 infections surged in Thailand after the holiday.

With the influx of new infections, hospitals began to fill up quickly and waiting lists formed to obtain a hospital bed. The government required anyone in Thailand who tested positive for Covid-19 to be immediately admitted to hospital for observation and treatment. This may have done more harm than good as there were reports of Bangkok hospitals refusing to administer Covid-19 tests because they didn’t have the capacity to take in any patient that came back positive.

Field hospitals have been set up using conference centres and sports arenas, and the country launched a plea for hotels to convert into “hospitels” – a hospital-hotel hybrid that could treat asymptomatic and low-needs patients and free up space for those in need of more intense medical care.

Vaccination has been slow and the government has come under frequent fire for their inefficient roll out. Confusion is constant with conflicting reports of deals being reached with vaccine manufacturers, delays in shipments and domestic manufacturing, questions about how to get a vaccine, and whether or not foreigners and expats in Thailand are even eligible for Covid-19 vaccination and at what cost.

This week the government push to vaccinate 50,000 people in core and dense areas in Bangkok after an outbreak of 300 new cases in the neighbourhood. But as of now, only 2 out of every 100 people have been vaccinated for Covid-19 in Thailand, a discouraging statistic when even India, in the midst of its catastrophic outbreak, has vaccinated 12 people out of every 100.

Here’s how Thailand compares to ASEAN members and neighbouring countries:

The American man who was recently arrested for allegedly murdering his pregnant Thai wife in Chiang Mai had been sentenced to 2 years of probation back in 2019 on assault charges after his gun went off while he was threatening a woman in Colorado. A report from the Associated Press says it appears to be the same woman.

Jason Matthew Balzer, 32, had initially faced attempted murder charges for assaulting a woman in Longmont, Colorado, but those charges were dropped. A Boulder District Attorney’s Office spokesperson told a local reporter in a previous report that “in every case, we need witnesses to testify at a trial. Unfortunately, due to issues with the victim’s availability, the higher charge had to be dismissed.”

The victim had called the police saying Jason had asked to have sex and then assaulted her when she said “no,” according to the arrest report. She told police he hit her face and slammed her head onto the bed’s headboard several times before taking out a revolver and threatening to kill her, the report says. The woman told police she pushed the gun and it went off near her head.

Balzer pled guilty to third-degree assault in December 2019 and was sentenced to 2 years of probation. In December 2020, Jason was arrested in Colorado after police allegedly found 73 guns in his van. Possession of firearms is a violation of probation. It’s unclear when Jason travelled to Thailand.

Since the case in Colorado involved a victim of domestic violence, the name was redacted in public court records, but a spokesperson for the District Attorney’s Office told AP reporters that the victim has the same name as the woman killed in Thailand. Based on photographs, the spokesperson says they appear to be the same person.

On Thursday, Jason was arrested in Chiang Mai. Reports say he confessed to stabbing and killing his wife, 32 year old Pitchaporn Kidchop, who was 3 months pregnant. Police say Jason sealed his wife’s body in a garbage bin before taking it to the woods about 5 kilometres away. In Thailand, a murder charge carries a maximum penalty of death.

Local police posted photos of the crime reenactment on Facebook. In Thailand, it is common for suspects to admit to crimes and reenactment the crimes to law enforcement officers and the press.