The Phuket mass rapid transport system, aka. Phuket Light Rail and Phuket Tram, is receiving more attention as the Mass Rapid Transit Authority of Thailand mull more changes to the design. The initial route, which would run from the Phuket Airport, follow the main north/south artery, Thepkasattri Road, then through Phuket Town and on to Chalong circle, has a projected budget of 35 billion baht.

The project, which has only received Luke-warm support from Phuket locals, was discussed in last Tuesday’s remote cabinet meeting in Phuket.

Now the designers are considering moving from a light rail carriage system that would run on rails, to an electric ‘bus’ model that would run along a normal road on rubber wheels. Consultants for the Mass Rapid Transit Authority of Thailand say they’re looking to adjust the operating system to reduce construction costs. They cited studies in foreign countries that have adapted to the of use rubber-wheeled electric vehicles and saved both construction and operating costs.

For the Phuket Light Rail project they project savings up to 10 billion baht in construction costs along with cheaper fares. The projected cost savings could total nearly a third of the total projected Light Rail budget.

Critics note that, whether a tram, bus or a light rail carriage, the planned route would do nothing for the island’s tourism industry as the service goes nowhere near Phuket’s west coast. (Of course any light rail would be totally unsuitable for the west coast’s undulating topography.)

The draft terms of reference, submitted to the MRTA, don’t specify that the new public transport system must be developed into a train or tram only. According to the latest study, only about 39,000 passengers per day were found to be using the system.

The current consultants are now investigating the merits of a Bus Rapid Transit, but using electric vehicles running along a centre ‘road’ designed to carry just the buses. the final proposal is expected to be proposed to the Cabinet for approval this year and open for service in 2026. 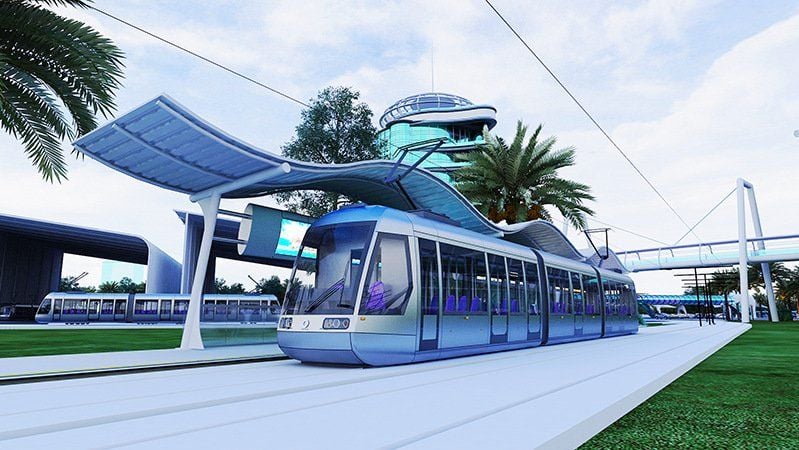 The transport minister said the details on how to construct the central road, stops and separation from the other traffic, would be a lot easier than a tram or light rail concept.

“Using road medians should not be a problem. The MRTA has discussed with the Department of Highways to dismantle the road medians, rework the road surface and use the barrier between the lanes of the BRT bus and general cars.”

“To use the road median area to develop the (new) BRT bus route, the MRTA must study the opportunity to develop a commercial area or further adjustment.”

The planned north/south route is planned to have 21 stops. In the future, there are also plans to extend the project to connect with a similar system which would travel north of the island, across Sarasin Bridge and into Phang Nga.