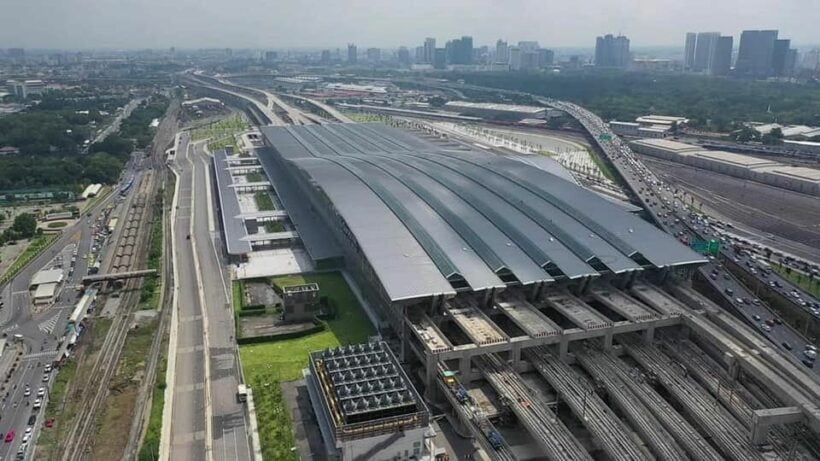 PHOTO: The sprawling Bang Sue Grand Station, set to take over from the old Hua Lamphong Station in central Bangkok

Trains, planes and buses in Thailand all have restricted travel at the moment. In the case of the flights, domestic carriers have been forced to cancel or reschedule hundreds of flights due to the high drop off of passenger traffic since the start of Thailand’s second wave of Covid-19 which kicked off on December 20 last year. But amidst the closures and restrictions, the move of Bangkok’s transport hubs has been continuing.

For the railways and the interprovincial bus networks, the government has closed down many of the services in recent weeks. The government is also proposing to close down train services out of the main Bangkok train hub, Hua Lamphong Station. But not because of Covid.

Bangkok’s Hua Lamphong Station is scheduled to stop being the hub for the country’s train networks in November this year when the newer, much larger Bang Sue Grand Station comes on line near the Chatuchak, north of the city centre. Hua Lamphong Station, open for 105 years, will end its role as the city’s main rail transport hub. The old station is located in between the Sukhumvit business and shopping areas, Chinatown and many of the capital’s main tourism sites and temples.

Bang Sue Grand Station in Chatuchak, will be Thailand’s new railway hub. It will replace the existing Hua Lamphong Station as the terminus for all long-distance rail services from Bangkok. The SRT proposes that the historic Hua Lamphong railway station will be used as a train depot and maintenance station. There is also a small museum at the station which catalogues the venerable old station’s contribution to the modern growth of the Thai capital.

But the State Railway Workers’ Union won’t hear of it and has rejected plans to close train services at Bangkok’s main train station.

President of The State Railway Workers’ Union, Suwit Kaewwan, has sent an official letter to Transport Minister stating that “thousands of commuters will be affected if all train services to Hua Lamphong Station closed this November as planned”.

“The Union disagrees with the idea that all train routes to Hua Lamphong should end. We would rather see a few routes being kept in service to reduce the impact on commuters.”

The union says that the State Railway Authority will lose future business opportunities if it closed Hua Lamphong railway station.

“The station is more than just a large train station but also offers cultural and historical value, which the SRT could exploit. SRT would squander opportunities for using Hua Lamphong to develop cultural tourism or arranging special train services if it closes.”

The new Bang Sue Grand Station already has connections to the existing MRT network and the yet-to-be-opened Airport Link to the Don Mueang International Airport.

The SRT governor admits some train commuters will be affected but that the agency has completed a contingency plan to help reduce the impact.

“It is similar to the closure of Don Muang Airport. Some people were affected. The next challenge is deciding what to do to reduce the impacts.”

PHOTO: The venerable 109 year old railways station is set to be closed in November this year.