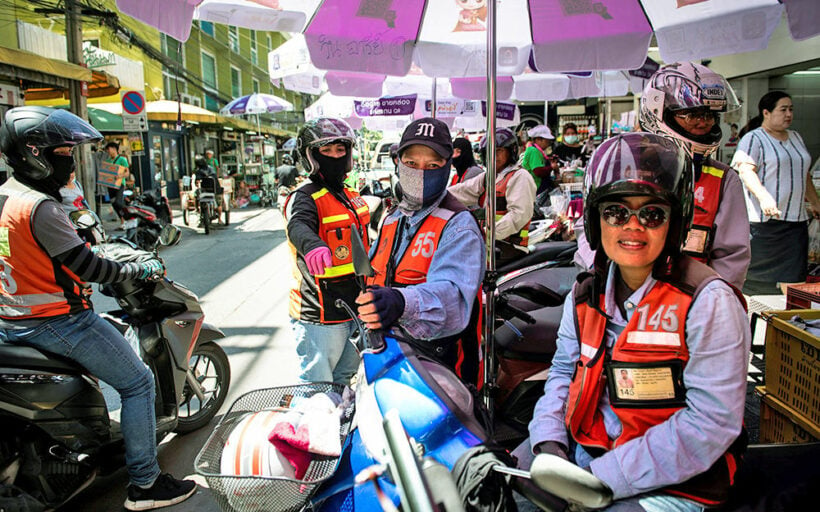 The Bangkok Metropolitan Administration says they will move all motorcycle taxis ranks (also known as “Wins”) off the city’s pavements by the end of this year. The awaiting motorcycle taxis, with their colour-coded high-viz jackets, are ubiquitous around the capital

Naew Na reports that 495 ranks currently use the pavements in 50 districts around Bangkok, to wait for customers. In recent years their ‘come-to-us’ business model has been challenged with Apps like Grab Bike where the motorcycle rider will come to where they are, along with the security of driver profiles and guarantee of costs before they book the ride.

It’s reported that the take over of the city’s sidewalks has been the norm since 2014, when permission was granted, provided bikes were wheeled up on to the pavements before touting for business. Not all drivers complied with this condition.

The BMA has recently started fining motorbike drivers who ride their bikes on the pavements, and it’s understood the decision to move the ranks is an extension of this policy, with 100 having already been relocated.

Bangkok’s deputy governor, Sakonthee Patthiyakun, says he hopes they will all be moved by the end of the year although no official deadline has been confirmed. The city currently has 88,578 registered “Win” drivers, using over 5,000 ranks.

The ‘gang’ culture of the Win riders, along with the key-money they have to pay to get into a Win gang, has been criticised in the past.