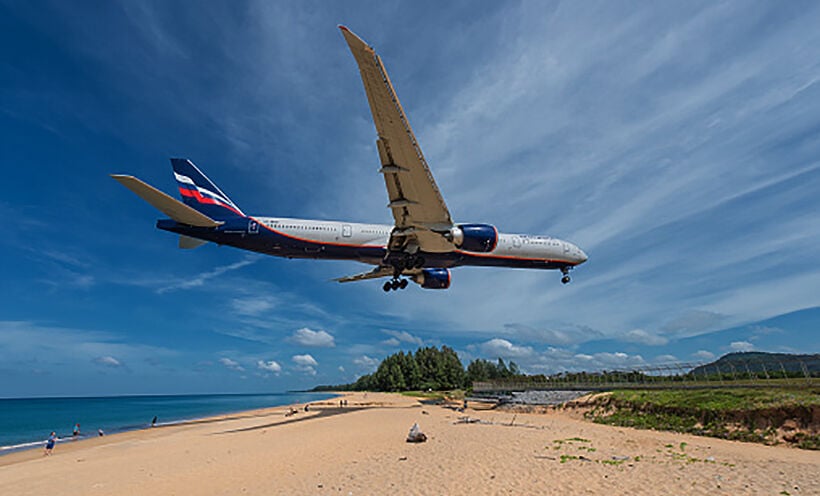 Aeroflot, Ural Airlines and S7 Airline planes are still arriving on schedule in Thailand today as nothing has changed, thus far, as flights into Thai airports from Russia are concerned.

But Thailand’s tourism tzars continue to monitor Russia’s invasion of Ukraine, as the world looks to ways of pressuring and sanctioning Russia, including access to its airlines across the world.

At this stage there has been no official comments coming from the Thai government about the invasion of Ukraine or any Thai reaction to the conflict, beyond assuring Thais in Ukraine that they will be evacuated.

Russian arrivals ranked Number One in Thailand during the first 22 days of the resumption of the Test & Go program, from February 1 – 22. 13,063 Russian tourists arrived in Thailand over that time, followed by 10,412 visitors from Germany and 8,900 from France.

Both Russia and China were two of Thailand’s top feeder markets before 2020, the start of the Covid-19 pandemic. The Chinese will remain notably absent until, probably, later in 2022. Now the Russian tourist tap may be switched off as well.

But with the developing conflict in Ukraine, the Russian Ruble has dropped around 18% against the Thai baht, since February 9, putting further pressure on Russian tourists travelling to Thailand at this time. Despite fluctuations, the Ruble is again on another downward trend versus most international currencies since the invasion on Thursday.

The other major threat to tourism arrivals, from just about anywhere in the world, is the huge surge in oil prices which will eventually hit plane ticket prices, including domestic flights within Thailand.

Oil prices briefly topped US$100 a barrel on Thursday reflecting panic in the first hours of the Russian invasion, the first time they’ve surpassed the US$100 mark since 2014, but they fallen back slightly since. In the 2020’s the average price was about US$39 a barrel.

So far there hasn’t been any immediate, or tangible, increase in flight prices inside Thailand, or internationally, but aviation experts believe that it’s just a matter of time.

They note that airlines with the youngest fleets, and the most fuel-efficient aircraft, will suffer the least as a direct result of the rising oil and, consequently, av-gas prices.

Following this week’s alteration of Test & Go program requirements, removing the pre-paid PCR test and night of accommodation on Day 5 (and replacing it with a self-ATK test to be uploaded onto the Mor Phrom App), tourism operators expect an uptick of new bookings, but fresh applications for the Thailand Pass remain under original predictions.

Tourism operators also believe that nurturing the newer feeder markets, of India and Saudi Arabia, will play a crucial role, both during the ongoing tensions in Central Europe, and the onset of Thailand’s low season.

Then there’s the surge in cases of Omicron in Thailand and how the government will react to that over the coming month.

Do you think Thailand should keep accepting Russian flights at Thai airports? Tell us your comments in the Thaiger Talk Forum (below)

oldschooler
20 minutes ago, Marble-eye said: "Let's hope it comes to an end soon without Russia acting as they did in Grosny where they virtually obliterated the whole city." I'm sure that Putin and his crones are working on it, they…
oldschooler
52 minutes ago, Fundok said: I did not specifically relate to WW I or WW II, for good reason. The world would have been a different one if the Entente (Germany, Italy, Japan) would have won - and for sure…
oldschooler
On 3/5/2022 at 4:45 PM, Grant said: What do you mean turning into an Authoritarian Regime?? It has always been that with him at the helm! He even changed the laws on terms of Presidency Russia always been under tyranny…
Vigo
On 3/5/2022 at 4:30 PM, focalS said: Please see my long read above. Russia is not a land where grassroots change is possible. Moreover, it is quickly turning into an authoritarian regime. With the passing of the law threatening 15…

Fundok
23 hours ago, oldschooler said: No Comparison between sometimes misguided actions of democratic accountable nations ( paid for at the ballot box) exclusively against nasty tyrannies, and evil acts of war & terror upon peaceful countries by brutal single- dictator…

With Pattaya’s Covid-19 surge, city PR “requests” no events with over 50 people