It’s the public, especially tourists’, “misunderstanding” of the way taxis fares are charged on the island of Phuket that is the problem.

That’s the explanation from Phuket Land Transport Chief Jaturong Kaewkasi during an interview on an island radio station this week. The Phuket Land Transport has responded to last week’s viral video clip when a Thai man posted the altercation with a taxi driver demanding 600 baht for a 10-15 minute ride from Kamala to Patong Beach.

The local Land Transport department has also re-released a list of standard set fares to be charged by the island’s taxis and tuk tuks. No mention of taxi meters.

One of his comments about the controversial fares suggested that passengers were entitled to “negotiate 50 baht higher or lower than the set fare”. Again, no mention of taxi meters.

When the first Sandbox project, in Phuket, was launched last year the Phuket Tourist Police published a schedule of fees after, just a year before, the former Phuket Governor declared that all taxis in Phuket would be required to use their meters. 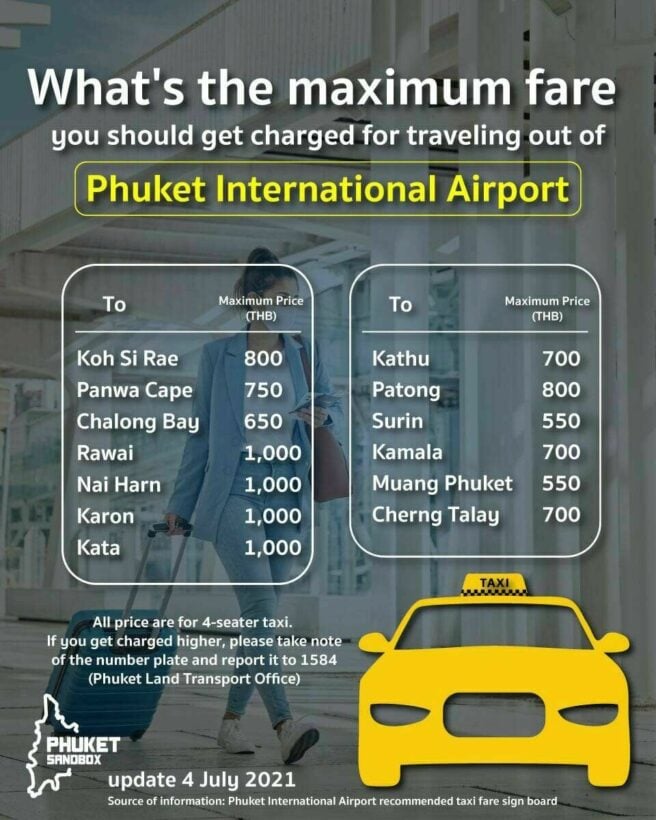 Last July’s published taxi fares in Phuket represent a big increase on what passengers routinely pay for trips around Bangkok, for example. The set fares are also 3 – 4 times that calculated by taxi apps like Grab and Bolt who are trying to get a foothold on Thailand’s most popular tourist island.

The PLT Chief went on to say, in quotes published by The Phuket News, that the “agreed fares” (agreed by who?) were fully supported by the Phuket Governor, the Phuket Tourism Association and the TAT.

Everything seems to be set in stone, except for the otherwise accepted use of taxi meters to establish a fair fare for passengers in Phuket.

The issue of Phuket taxi fares has been an ongoing controversy for more than 20 year with The Thaiger and its former incarnation The Phuket Gazette publishing over 50 stories on the issue over recent decades. Even 20 years ago there is a story published that Phuket Airport may eventually get served by taxis with meters.

“…metered airport taxis would reduce exorbitant fares and problems between legitimate and black taxi operators at the airport.”

Multiple Phuket governors, police chiefs, and even the army (following two past Thai government coups), have failed to break the strong grasp on the local industry by a cabal of taxi gangs.

Meanwhile, Bolt and Grab drivers on the island have expressed fears to drive in some parts of the island, or park in popular tourist locations, for fear of reprisals from the taxi gangs. Disputes over the years have sometimes ended in violence, including the beating to death of a legitimate “limousine” driver by a taxi driver at Phuket Airport in December 2000.

JamesR
1 hour ago, Vigo said: The comparison to a western fare is inappropriate. let's use your NYC to illustrate. NYC Taxicabs are regulated and in order to be allowed to operate, and for drivers to receive their medallion, the following requirements…
JamesR
4 hours ago, AussieBob said: One day my team (from Sydney) and I went out to a big dinner in Melbourne to celebrate a big win. We went straight to the restaurant from the business centre where the deal was…
JamesR
On 2/4/2022 at 4:17 AM, Marc26 said: I think this post represents so many guys that come to Thailand To me, there are so many guys that aren't shit where they come from So they come to Thailand, get a…
Vigo
11 hours ago, JamesR said: I have not seen any taxi thugs in Phuket up to now. There are guys on the side of the road holding a piece of cardboard with "Taxi" written on it, you go up and…
LoongFred
On 2/4/2022 at 1:17 PM, Bifrost said: Turists Misunderstand ? no they are just surprised to pay 10 times more than in Bangkok cause the island Phuket is runned by criminals mafias and gangsters - thieves currupt official who onle…