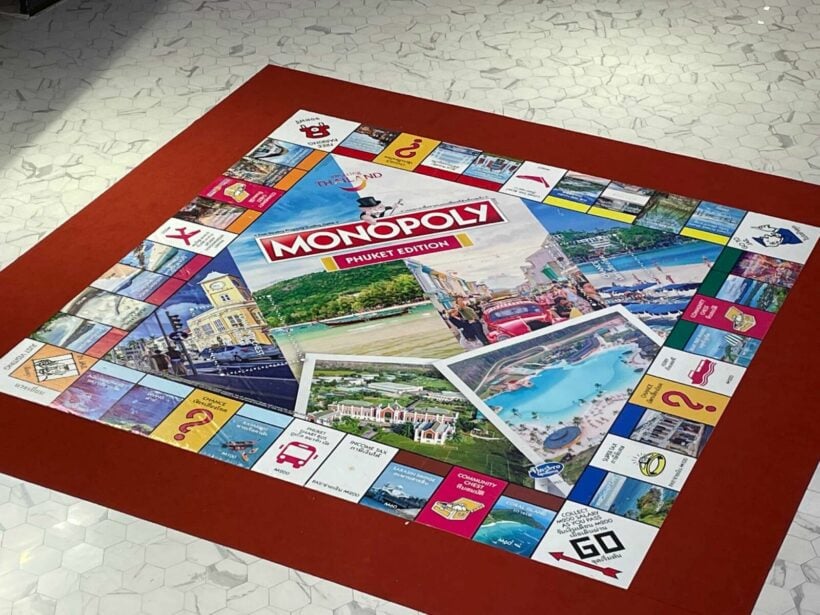 Welcome to Phuket and some of the most famous attractions like Utopia, BCIS, BIS, The Nai Harn (hotel), Blue Elephant and The Phuket News. All for sale with your Monopoly money when the game becomes available.

Whilst you will see Mai Khao Beach, Phuket Town, Cape Promthep, the Karon Viewpoint and Kata Beach, the new Phuket Monopoly board game, due to be on sale in a couple of weeks, is big on marketing revenue for HasBro, the makers of Monopoly, and low on a real ‘Phuket’ vibe.

The Thaiger was excited to see how the final Phuket Monopoly would turn out, only to end up disappointed with the final result. Of course HasBro are well-entitled to market their game and reap the rewards – it’s just not the experience we were hoping for.

Of course the game, selling properties around Phuket, a lot of them ongoing businesses, seems to miss the irony that foreigners can’t buy land in Thailand.

The TAT organised a paid promo trip for some Thai media and bloggers yesterday who waxed lyrical about the newly launched game. Perhaps the TAT could have stumped up the cash to buy all the squares and ensure the Thai island version of the iconic board game could have been a better marketing tool for Thailand?

Guest1
due to be on sale in a couple of weeks If I did read that right, from march 28 on it's available in the true shop in central. At least they were advertising it

Marble-eye
Note to self: take a screen shot of the board as it could be Big Hewers next weekly quiz. 😀
HiuMak
4 hours ago, Thaiger said: Welcome to Phuket and some of the most famous attractions like Utopia, BCIS, BIS, The Nai Harn (hotel), Blue Elephant and The Phuket News. All for sale with your Monopoly money when the game becomes…