More details have emerged as the hotel in Khao Yai in Nakhon Ratchasima has held tight in their vow to sue a woman who left a slightly negative review for 3 million baht. The names of the resort and the woman involved were made more public as a lawyer representing the woman gave details about the incident.

Sittra Biebangkerd said he was representing a client named Ms Khing who had posted a review that rated the Ozone Hotel Khao Yai a 6 out of 10. She posted the mildly negative review on December 19 on Agoda, the popular hotel booking website based in Singapore though part of the American company Booking Holdings that includes the larger site Booking.com.

In the review, she complained about the quality of the service she received and the facilities that the hotel offered and ranked the hotel as a 6 out of 10, not an intensely negative score, but not a glowing critique.

Though she believed to review was anonymous, she soon received a threatening call from the resort claiming that they considered her review defamation according to Thai law, and that she had ruined the reputation of their property.

They demanded that she delete her review immediately, and issue public apologies in 5 major newspapers every day for one week. She was also given 15 days to pay compensation of 3 million baht for the damages caused by her review. The resort threatened that if she didn’t comply she would be hit with civil and criminal lawsuits for the review. 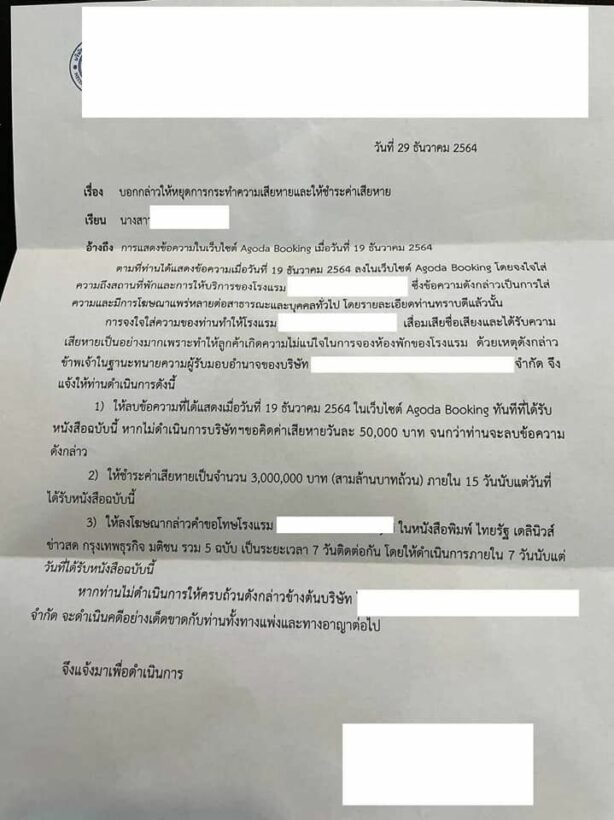 The lawyer said that he had taken on the case and will be defending her against any charges that the hotel files. The woman said she was shocked by the harsh phone call and demands and felt very threatened and that’s why she contacted a lawyer.

She said that she was just a regular customer with no hidden agenda who posted what she thought was an honest assessment of her stay. She even issued an apology to the hotel saying that she wrote the review in good faith hoping that constructive criticism would help them improve their property for future guests.

If the hotel thought that the damage their customer service reputation would receive from the review was bad, the predictable backlash they received online must certainly be worse. Their Facebook page was flooded with comments regarding their 3 million baht threat to the point that they had to disable commenting on their posts.

Thai social media exploded with people arguing that customers have a right to complain about a bad experience. Some also attacked Agoda for the apparent looseness of their privacy policy that allowed the resort to get information on who left the review she thought was anonymous and go after her.

JamesR
7 minutes ago, Vince said: Yes, but these are still transitory issues. I used to read reviews on a website with four letters starting with a y (mostly food) and there was a strong pattern in reviews. One pattern was…
Jason
What a story about nothing...a storm in a tea cup... can't believe a hotel would give this story oxygen. One below standard rating in 100 isn't going to make people shy away from your hotel...even 20 wouldn't. As long as…

Lowseasonlover
On 1/15/2022 at 11:43 PM, JamesR said: Replies from the restaurant manager or whoever can respond to an online comment e.g." We were sorry to inconvenience you dear customer, the toilet has now been replaced." Or as I did regarding…
JamesR
On 1/17/2022 at 10:37 AM, Lowseasonlover said: Russian left a review saying I was pissed he arrived at midnight, My reply, Everybody at midnight on a Friday night in Phuket is pissed just like you and your wife were for…

Bluesofa
On 1/13/2022 at 5:48 PM, Pietpiet said: I have had 2 bad experiences with Agoda and will never use them again, but did not know they were connected with Booking. Com. Will make sure I never use either of them…