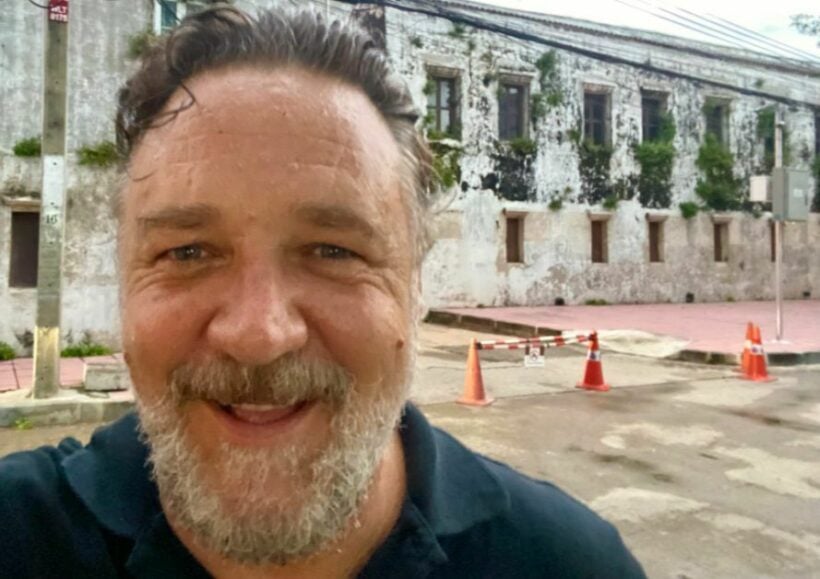 That Thai woman who escaped Phuket and snuck to her hometown in Chon Buri is no longer the most famous person in the Phuket Sandbox. Movie star Russell Crowe blew up Thai media when he posted his positive experience coming to Thailand through the Phuket Sandbox to film his newest movie.

The star of such Hollywood hits as Gladiator and A Beautiful Mind came to Thailand to shoot a Vietnam War movie called “The Greatest Beer Run Ever”. He stirred up a frenzy online after posting about the Phuket Sandbox on October 11 explaining the process simply, as well as posting some Thai sights around Phuket and later Bangkok.

PM Prayut Chan-o-cha said today that Crowe posting praise for Thai people, food, and scenery brought great pride to the country. The movie star seemed generally positive about the experience including the Sandbox, though he posted it was 14 days as he started the soft quarantine just before it was shortened to 7 days.

“Thai people are so friendly, so welcoming and of course the food is just amazing. So, if you’ve been locked down, if you’re feeling that wanderlust stirring in you now that we have a date for open borders…”

Among the pictures he posted to Twitter, Crowe seemed to be enjoying some typical Thai symbols like Tuk-Tuks, as well as sightseeing landmarks like Chinese shrines and the Kanlayanamit Temple.

But perhaps his most popular was one sight that Bangkok (and Thailand in general) is famous for that often shocks first-time visitors: the massive tangle of electrical wires that are often sparking at the electric pole contact points. Crowe captioned it “Bangkok Dreaming…” though many in Thai social media retweeted it with the hashtag “Welcome to Bangkok” trending after.

The movie he’s here filming costars Zac Efron and is directed by Peter Farrelly (known for wacky comedies like “Dumb and Dumber”, but whose “Green Book” won an Academy Award for Best Picture in 2019). It is based on the book of the same name by Joana Molloy.

Poolie
24 minutes ago, RobMuir said: Don't shower or shave. And chew with your mouth open. And fart a lot. It works a treat. All at the same time?

gummy
20 minutes ago, Poolie said: All at the same time? Only if you are Australian 😂
Jason
I have to echo the comment of a fellow Aussie on here. I not going to ask how an actor, a sports star, a politician can walk through the rain drops of restrictions in my country or Thailand. Everyone in…