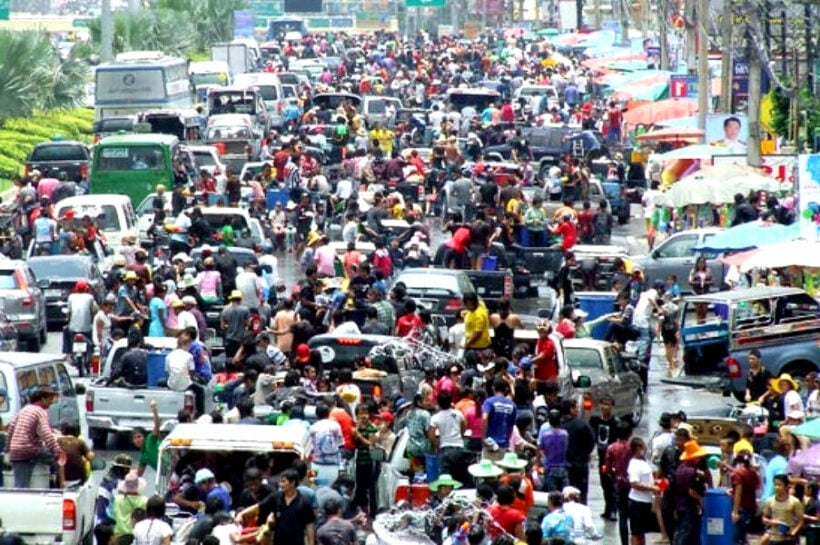 FILE PHOTO: Millions traveled for Songkran, but not nearly as many as usual, like this 2013 Songkran photo.

Covid-19 and its third wave be damned, close to 8 million vehicles travelled in and out of Bangkok so far during this year’s Songkran festival holiday period. Thailand’s Ministry of Transport released figures yesterday on the yearly holiday and revealed that more than 7.87 million cars, trucks, buses and motorbikes hit the roads and travelled into and out of Bangkok during the festival period, despite almost all official celebrations, events and gatherings being cancelled nationwide again this year.

The figures, calculating incoming and outgoing traffic between April 10 – 14, show that travel is much lower than originally predicted but massively higher than last year’s travel. The drop makes sense as many predictions may have been made before the last minute closures of entertainment venues and cancellation of Songkran events due to the recent third wave outbreak of the B117 strain of Covid-19.

On the other hand, in what may be a bad sign for Thailand’s health, at a time when new daily records are being set for Covid-19 infections, many more people are ignoring the pandemic and travelling anyway.

The nearly 8 million vehicles on the roads to Bangkok during Songkran represent a nearly 35% increase over last years Coronavirus-muted figures. And when social distancing is of utmost importance, the 4 and a half million people travelling by public transport is a startling 74% increase over the nearly completely locked-down figures of 2020’s Songkran holiday period.

One final note for the “if Covid-19 doesn’t get you, climate change will” crowd: Of the 7.87 million cars, buses, trucks, and motorbikes on the road, a very non-eco-friendly 7.4 million of them were private vehicles.