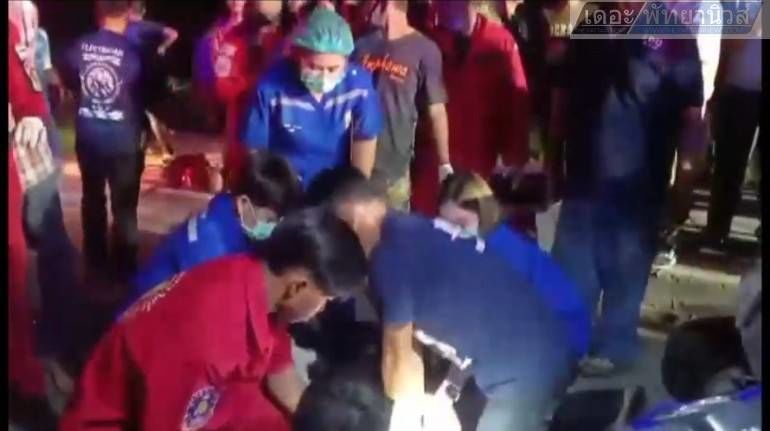 A 40 year old motorcyclist has been killed instantly while the passenger ended up seriously injured after a 5 car pile up in the Ban Bueang district of Chon Buri on Saturday. Emergency responders arrived at the fatal crash scene on the Ban Bueang – Klaeng road after 9pm on Saturday night.

A blue motorcycle was seen badly mangled and embedded into the back of a Toyota sedan. Two pick-up trucks and a six-wheeler truck were also found nearby with heavy damage.

The Cambodian motorcyclist was killed instantly and his 40 year old passenger, also from Cambodia, was found unconscious and was taken to hospital in a serious condition.

The Toyota driver told police that… “something cut out in front of his car”, causing the sedan to lose control before swerving into a traffic island and then colliding with two pickups, a motorcycle and a truck. He was unable to decrier to police exactly what “ran out in front” of his vehicle.

Police have been reviewing CCTV in the area to determine what happened, when, before laying any further charges. One of the drivers in the pile up told police that the first sedan was seen “gliding” across the traffic island before crashing into a the first pick-up and then into his own pickup, before crashing into the motorcycle.

Investigators say that all drivers and witnesses were questioned later as police considered them all dazed and confused the incident in the immediate aftermath.