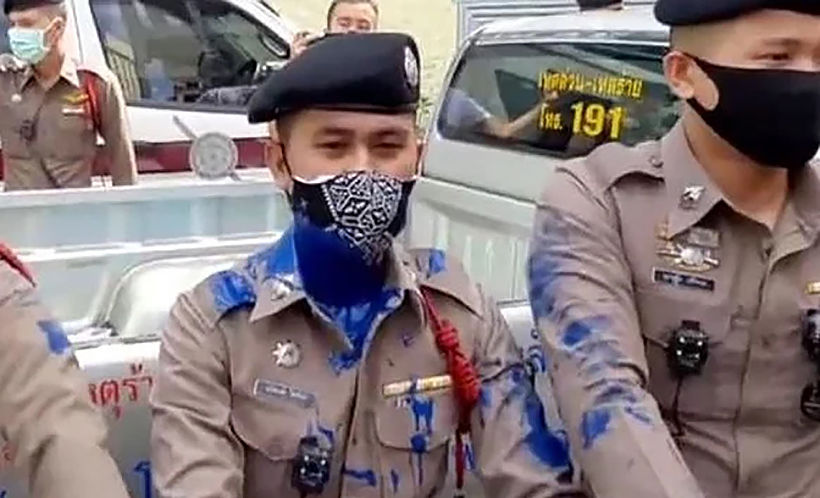 A singer who threw blue paint on police during Friday’s protest in front of Samranrat police station in Bangkok has drawn mixed reactions from all sides of Thailand’s political spectrum. The lead singer of the Bottom Blues Band, Chai-amorn “Ammy” Kaewviboonpant, hurled blue paint at officers during a brief commotion in front of the station, where anti-government protesters had gathered to offer moral support to Chatupat Boonpathararaksa, aka Pai Daodin, who was reporting to the police to acknowledge charges against him.

Chai-amorn claims he was acting in retaliation for police harassment of activists, who are being “painted” negatively by the police. He also vowed to repeat the act, which he says is a form of art.

Social activist and lawyer Srisuwan Janya, known as Thailand’s “complainer-in-chief”, described the singer-songwriter’s alleged transgression as “disgusting”, and warned that he shouldn’t complain if he’s charged under Section 358 of the Criminal Code, which carries a possible prison sentence of up to 3 years and/or a fine of 60,000 baht.

But former journalist Sutin Wannaboworn says the singer is sending a message larger than just a paint-throwing incident.

Former national human rights commissioner Kanchana Nilapaichit said she disagrees with the singer’s action and demanded the Free Youth movement explain themselves, demanding “What if the paint got into their eyes?” She added that a police officer is still a civilian after removing his uniform.

“People who believe in peace will be tolerant and use dialogue.”

Sirawith Seritiwat, alias “Ja New”, a leader of the Pro-election group, said that throwing paint at someone is well within the definition of non-violent means, saying the stained police uniforms can be washed or replaced. Sirawith has himself been the victim of violence twice in the past. The former protest leader, who tried to expose alleged corruption in the construction of the Rajapakdi Park in Hua Hin, cited his experience of losing an eye during an assault, saying:

“Do not raise the bar of peaceful means so high that we can do nothing. It must be condemned if acid is used or if someone is struck with a wooden club. Throwing paint may look violent, but it is not a violent act.”

Anti-government activist Sombat Boonngarm-anong has offered 5,000 baht for one of the police officers’ stained uniforms, saying it’s of artistic value should be kept.